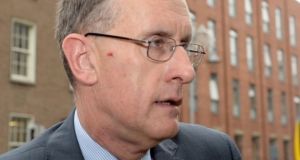 Comments by Dublin City Council’s chief executive Owen Keegan in relation to homeless provision in Dublin were certainly inflammatory, and probably ill-judged, but are essentially statements of fact.

The fact the council and the Department of Housing have taken various policy decisions, firstly to house homeless families in hotels, then accord homeless people priority for housing, then to open family hubs, has prompted people in difficult circumstances to assess their options.

This is what Keegan was rather undiplomatically pointing out in an interview with the Sunday Business Post. Providing more homeless accommodation, and increasing the quality of that accommodation, made it an attractive option for some people, he said, and they may not want to leave.

He was quoted as saying: “When you do go out of your way to increase accommodation and improve the standards of that accommodation and provide a whole load of support services ... it’s a much more attractive place to be ... supply creates its own demand.”

He expanded on these comments on Today with Seán O’Rourke saying it was “quite possible” and “understandable” due to better services, people who previously would have stayed with their parents in cramped conditions, were instead presenting as homeless in an attempt to access permanent social housing.

This echoes even more inflammatory comments made just more than a year ago by the former chairman of the State’s Housing Agency Conor Skehan, who said families may be “gaming the system” by declaring themselves homeless to jump up the housing waiting list.

When the comparison was made by O’Rourke, Keegan said: “I never said people were gaming the system. I went out of my way to say I wasn’t questioning the motives of people.”

Neither Keegan’s nor Skehan’s comments should seem surprising or shocking. Leaving aside the tone of their delivery, they are essentially stating facts that were demonstrated when the policy of prioritising homeless people for housing was dropped.

In January 2015, following the death of Jonathan Corrie who had been sleeping rough near Leinster House, then-minister for housing Alan Kelly, ordered that 50 per cent of all social housing available in Dublin be allocated to homeless people.

The following year, the Housing Agency told the Government this may have created a “perverse incentive for households to present as homeless” and the requirement was dropped.

However, it was not until last May the city council ended the policy. As reported at the time the council’s head of housing Brendan Kenny said he was “concerned families may endure a prolonged period in emergency accommodation” in order to secure “permanent social housing”.

While this was “completely understandable”, he said, the council did not have adequate housing stock to house these families.

Those already in the system did not lose their priority status, but the newly homeless would not go to the top of the waiting list.

According to new figures from the council the policy is starting to bear fruit. In 2018, 23 per cent of housing was allocated to homeless people, down from 45 per cent in 2017.

Comparing the last six months of both years, the number of “new family presentations” was down 8 per cent, but comparing the last three months of the year they had reduced by 36 per cent. The policy change had “gradually begun to be understood by new entrants to homelessness”, the council said. But that message, when conveyed by Keegan, was lost in translation.

1 Large crowds gather on Dublin’s Grafton Street on eve of lockdown
2 Galway nursing home sees 26 out of 28 residents test positive for Covid-19
3 One hundred Irish retailers for all your online Christmas shopping
4 Thousands of gardaí mount checkpoints and patrol parks, beauty spots
5 Life under Level 5: Where can I go, who can I see, what is closed and what is open?
Real news has value SUBSCRIBE