Number of homeless children increases by 10% in past year

Total number of people listed as homeless across the State is now just under 10,000 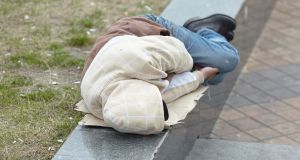 The latest figures from the Department of Housing show there were 9,987 people in emergency accommodation during the week of January 21st to 27th. Among these were 1,614 families and 4,104 single adults.

He added: “We remain in a very difficult situation where homelessness is heavily impacting on the lives of families and individuals. There was a decrease of people in emergency accommodation in December, which we understood at the time to be partly due to seasonal reasons, and so an increase in January was anticipated but that doesn’t mean it is acceptable.”

Anthony Flynn, chief executive of Inner City Helping Homeless, said: “This is a gross understatement as we are a long way past disappointed. This is beyond frustrating and the Government’s lack of will to build new public housing on available public lands is at the core of the current crisis.”

Focus Ireland said the figures showed Government was “still failing to tackle the deepening crisis” and called for shift away from providing hubs to increasing social housing.

Sinn Féin spokesman on housing, Eoin Ó Broin said: “The Minister has called the figures disappointing. This is deeply insulting to all those people left homeless as a result of his failures. Today’s figures are an outrage.

“Since Minister Murphy became minister homelessness has increased by a shocking 26 per cent. He is failing and he must resign.”

Solidarity spokesman on housing Mick Barry said the figures illustrated, “the shocking failure of the capitalist market to deliver any vestige of social justice and the abject inability of this landlords’ Government to tackle the housing crisis.

“Any government which allows homelessness to touch the 10,000 mark does not deserve to remain in power”.