Refurbishment of draughty and mouldy flats cancelled after councillors’ vote

Senior citizens living in a Dublin City Council complex have successfully lobbied the Council for changes to their living conditions. Video: Enda O'Dowd 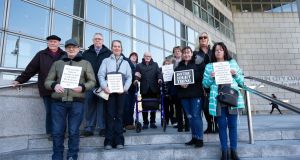 A group of elderly tenants who protested outside Dublin City Council on Tuesday about the state of their housing, are hopeful they could be relocated “within weeks”.

The residents of Millwood Court, a council-owned senior citizens’ complex of 41 bedsits (of which 12 are vacant) in Edenmore, north Dublin, had been “very annoyed” and “disappointed” to hear last week that plans to refurbish the dilapidated homes and rehouse some of them, were cancelled.

This followed the rejection by local councillors of proposals to hand the complex over to an approved housing body (AHB), Fold Housing, to regenerate the site.

Some 12 of the 29 tenants would be rehoused at a new Fold Housing development on nearby Tonglegee Road while others would be temporarily accommodated pending return to Millwood Court.

Built in the 1950s, it is one of about 50 older people’s housing estates owned by the council and in urgent need of upgrading.

The council has said, given the depth and breadth of the housing crisis, it would need an approved housing body such as Fold Housing to carry out much of this work.

Each bedsit has a tiny kitchen, shower room and a larger room with a single bed, arm chair, small table and chairs, wardrobe and a television.

They are cold, draughty and some are badly damaged by mould. Though most have central heating, the lack of insulation allows heat to escape.

Residents are also concerned about fire safety and the fact that they have found needles in the laundry room, which has just one washing machine and drier between almost 30 people.

Tony Treacy (79), who uses a walking frame, was among those who joined neighbours on a hired minibus to the city centre, to protest at Wood Quay. He moved to his bedsit two years ago having lost his private rented accommodation, paying €45 a week. “It is a total nightmare. I have no room at all. I have to eat, sleep everything in the same space. And nothing works. When I fell two weeks ago, I couldn’t reach the alarm.” His home is cold and he had been looking forward to moving out.

“I feel very upset and very annoyed. It meant so much. It’s heartbreaking to be told the council are going back on their promise. Basically we want somewhere decent to live in, a little bit of comfort for the rest of our lives.”

Tony Donegan (63), a resident for nine years, pays rent of €33 a week. Though his main living/bedroom is “alright”, the walls and ceilings of the kitchen, shower-room and hall are badly scarred with black mould. He was attacked in 2016 in his home by “two men” with scissors. “I just want to get out of here,” he says.

Vincent Bradshaw (59) has emphysema and recurrent pneumonia. He has a wheelchair which he can’t use due to lack of space and remains almost housebound. The “cold and damp” exacerbate his lung problems.

Patrick McMahon (71), who has an undiagnosed condition which leaves him very sensitive to cold, cannot use the shower as being in the bathroom is “like standing in ice”, while Eliso Kalojan (66) describes using the shower as a “special type of punishment”. She pays €35 a week and points to draughts around the front door and windows, a broken window and a hole between her and her neighbour’s kitchen.

During the protest the council’s head of housing, Brendan Kenny, invited them to meet him.

He confirmed to The Irish Times the arrangement with Fold had been withdrawn last week after councillors rejected the original plan. He was confident, however, that if local councillors agreed to Fold and the council working together on plans for Millwood Court, that the question of Fold taking possession of it could be examined later.

“If we get the councillors’ agreement we could move some of the residents out in a matter of weeks,” said Mr Kenny.

Noel Callan (85) was happy with the outcome, he said, but wouldn’t start packing yet.