Rohingya in Carlow: ‘Irish citizenship has given me happiness’

Mohammed Rafique fled persecution in Myanmar in 1992. Here he talks of the continuing struggle for Rohingya Muslims in his home country, and his debt to Ireland and its people. Video: Enda O'Dowd 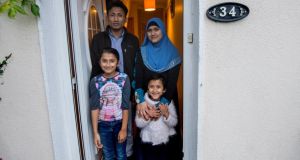 Mohammed Rafique and Rafika Begum with their children Jamalida (8) and Waheeda (4) at their home in Carlow. Photograph: Brenda Fitzsimons

In August 2017 more than 100 people gathered on the grounds of the Carlow College, St Patrick's*, for the official reopening of the Carlow Cricket Club. The club, which was originally established in 1834, closed its doors in the early 1980s due to a lack of local interest in the sport.

However, the arrival of a small group of enthusiastic cricket players to the southeast of Ireland in 2009 quickly led to a resurgence in the popularity of the game.

Carlow’s Rohingya community moved to the town in 2009 after they were resettled from refugee camps in Bangladesh by the United Nation Refugee Agency (UNHCR). The 64 refugees arrived without a word of English after suffering a lifetime of hardship and persecution.

Eight years later they stood proudly in the summer sunshine and watched as the cricket club, made up of more than 13 nationalities, formally reopened after tireless work and campaigning to provide an outlet for the sport they love so dearly.

Mohammed Rafique, an active member of the Carlow Integration Forum who helped re-establish the club, said building a cricket club for children, young people and adults in the area had enabled the Rohingya community to express their sincere gratitude to the people of Carlow for their support.

“We need to do positive things for this country. In my opinion, no matter where I come from, I have some responsibility to help this country,” he explained.

“Between 1982 and 2013, I was stateless. I really appreciate what the Irish people have done for us. They gave us the chance to call Carlow home. Irish citizenship has given me happiness. It has given me a new life, human dignity, the ability to travel and basic human rights.”

Rafique, his wife Rafika and their eight-month-old daughter Jamalida left the Kutupalong refugee camp in Bangladesh in early 2009 after they were selected by the UNHCR for resettlement in Ireland. They left behind an overcrowded makeshift city filled with hundreds of thousands of refugees forced to leave their homes in neighbouring Myanmar.

Rafique was 10 years old when, in 1992, his parents and siblings fled Myanmar and travelled over the border to the Kutupalong camp where he spent the next 17 years of his life.

A decade earlier, Myanmar had enacted a citizenship law stripping the Rohingya community of their citizenship and leaving their people stateless. In 1991 the nation’s military began implementing the “clean nation” operation to rid the country of its Muslim minority groups with widespread forced labour, summary executions, torture and rape.

Rafique met Rafika, who was just one year old when she left Myanmar, in the camp and they were married. Their first daughter, Jamalida, was born on the muddy floor of a temporary hut without medical assistance while torrential rain poured down outside. Their second daughter, Waheeda, was born in completely different circumstances to her older sister – in a clean hospital bed in St Luke’s General Hospital in Kilkenny with the guidance and support of a whole medical team.

Nearly a decade later, the family live in a modest home in an estate in Carlow town. The house is walking distance from the girls’ school, where Rafique attended the annual Christmas performance in December.

“Watching Waheeda in the Christmas play standing on stage with all the other children made me so happy. But it also made me think of the camp back in Bangladesh where many of my relatives are looking for the same opportunities for their children. They want a better future for their family but have no clothes, no education and no food.”

Rafique’s parents and siblings still live in the Kutupalong camp near the border town of Cox’s Bazar in Bangladesh. With more than 655,000 Rohingya fleeing Myanmar since August 2017, the overcrowded camp is becoming increasingly susceptible to disease as well as violence, particularly violence against women and girls.

For a long time, Rafique hoped Aung San Suu Kyi (now Myanmar’s de facto leader) would use her power and international influence to bring an end to the persecution of the Rohingya people. Rafique and other members of Carlow’s Rohingya community even travelled to Dublin when Ms Suu Kyi visited Ireland in 2012 to accept her freedom of Dublin (the award was rescinded last December).

However, their faith in her crumbled in recent months as Ms Suu Kyi stood by in silence while hundreds of thousands Rohingya people, the vast majority of whom come from the Rakhine state, faced extreme violence and persecution by the Myanmar military.

“When we were suffering we thought Aung San Suu Kyi was our only hope. We, the Rohingya community, strongly supported her during house arrest. But we are disappointed by her silence. At first we thought it was just a lack of information but now we realise it’s about power. She’s thinking about the next election and wants to stay in power. She’s no longer a human-rights activist.”

In November 2017, representatives from Carlow’s Rohingya community wrote to Dublin City Council requesting that they remove Ms Suu Kyi’s freedom of the city following months of widespread oppression in her home country.

“Since entering politics and forming her government after the landslide victory in 2015, she forgets the promise and her moral duties to protect and defence human rights in her own backyard,” wrote the letter. “The abject cowardice she has shown to stand up against the world’s most persecuted people; the moral failure she has demonstrated to condemn the atrocious actions of military; the vicious denial she has forged to label the well-documented crimes against humanity as ‘fake’. . . all invariably indicate the downfall of our once considered ‘beacon of hope’ and ‘champion of freedom’.”

Ms Suu Kyi was stripped of her freedom of Dublin in December following an overwhelming vote from Dublin city councillors.

Rafique, who blogs about his experiences as a refugee to raise awareness of the Rohingya plight, worries that without an international response to the violence the situation in Myanmar and Bangladesh will continue to deteriorate. “In Bangladesh every day people are dying in those camps because they don’t have proper food, especially during the winter. Young babies are dying too. My own father is very sick but he cannot get permission to leave the camp to go to hospital.”

Ciarán Breen, a policy adviser with Oxfam currently working in Bangladesh, has expressed concern over the treatment of repatriated refugees following an agreement between Myanmar and Bangladesh to send hundreds of thousands of Rohingya people back to Myanmar. “It’s a good step they’re talking to each other and engaging with the issue but all the violence, the murder, the rape and burning of villages hasn’t been addressed. There’s no indication the violent and hateful approach from the military has stopped.”

Late last year Pramila Patten, UN special envoy on sexual violence in conflict, underlined the danger of Ms Suu Kyi refusing to engage in “any substantive discussion” regarding reports that women and girls were being raped by Myanmar troops. Ms Patten also expressed fears that repatriated Rohingya would be faced with a “prevailing climate of impunity” in the country.

Last December, Rafique received an award for his work in campaigning and awareness raising at the Volunteer Ireland Awards.

“When I collected the award in Sligo everyone came up to me saying they’d heard about the Rohingya issue. It’s good that people are educated about Rohingya now, as many people didn’t know anything about it before. But we believe that without international pressure nothing will change. The human trafficking, the gangs, the rape of women and girls, the violence, it’s all unacceptable. This is an international issue now, not just a Rohingya issue any more.”

*This article was edited on February 21st, 2018. An earlier version reported that Carlow Cricket Club reopened at Carlow Institute of Technology instead of Carlow College, St Patrick's.