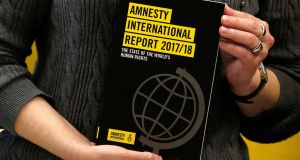 A copy of the Amnesty International Report 2017/18. Photograph: Reuters

Published on Thursday, the State of the World’s Human Rights report for 2017, says “hate-filled rhetoric” is having “terrifying consequences” across the world and also mobilising activists in a way not seen in decades. Human rights in 162 states are examined.

“As we enter 2018, the year in which the Universal Declaration of Human Rights turns 70, it is abundantly clear that none of us can take any of our human rights for granted,” says Salil Shetty, secretary general of Amnesty International.

“The...rising politics of demonisation...were laid bare in the horrific military campaign of ethnic cleansing against the Rohingya people in Myanmar. This caused an exodus of some 655,000 people into neighbouring Bangladesh in a matter of weeks, the fastest growing refugee crisis of 2017.”

This disaster will stand out “as testament to the world’s catastrophic failure” to address the conditions that allow “mass atrocity crimes”. The warning signs – the brutal discrimination against the Rohingya people – had “long been visible”.

He says in the report that “assaults on the basic values underpinning human rights...assumed vast proportions” in 2017, in the “humanitarian catastrophe in Yemen”; the indiscriminate killing of civilians by Islamic State in Iraq and Syria, and, international war crimes committed in South Sudan.

The reported notes that wealthy countries’ leaders treated the growing refugee crisis with a mix of evasion and callousness, treating refugees as “problems to be deflected”. Though epitomised by US president Donald Trump with his “hateful move” to ban entry to all citizens from several Muslim countries, it was also evident in EU leaders’ unwillingness to regulate migration safely and legally.

“However 2017 also demonstrated the enduring willingness of people to stand up for their rights and the values they want to see in the world,” says Mr Shetty. He cites mass mobilisations of people in Poland, Zimbabwe, India and the US, as well as the movement of women, and men, across the world around the #MeToo hashtag against sexual abuse and harassment.

In its chapter on Ireland the report notes the Government’s commitment to hold a referendum on abortion rights “in early 2018”, highlighting a number of negative statements from such bodies as the UN Human Rights Committee and the UN Committee Against Torture about women’s sexual and reproductive rights here.

The report notes the Supreme Court ruling in May 2017 that an absolute ban on the right of asylum seekers to work was unconstitutional.

On housing, the report refers to the growing number of people experiencing homelessness, and also a decision from the European Committee of Social Rights in October, about living conditions on local authority dwellings.

Legislation criminalising the purchase of sex was commenced in February 2017. However, “several aspects of sex work remained criminalised despite international evidence that this can place sex workers at high risk of stigmatisation, isolation, violence and other human rights abuses”.