Smithfield back on grid after fire sparks power cut 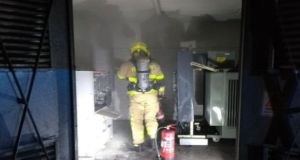 The fire brigade said there were no reports of death or injury. Photograph: Dublin Fire Brigade

Power has been restored in the Smithfield area of Dublin after a power cut due to a fire.

Approximately 1200 customers lost electricity supply before it was restored at 7.30pm.

Dublin Fire Brigade said multiple tenders were called to the scene but the fire was brought under control and there were no deaths or reports of injury.

Firefighters from B Watch Phibsborough & Tara St have dealt with a fire in a sub station on North King Street. Road now clear but power out in area #Dublin #fire pic.twitter.com/RfU8i4kVzI

A number of homes and businesses were left without power around Queen street, Wolfe Tone street and North King Street.

Apartments, offices and restaurants in the area were evacuated and closed.

Traffic signals remain out in Smithfield and on Church Street and North King Street and drivers have been asked take care on approach.

The Lighthouse Cinema in Smithfield tweeted: “Due to a electrical issue in Smithfield Square our evening screenings have been cancelled. Sincerest apologies for any inconvenience caused. The issue is being worked on and we hope to have power again soon. We’ll have an update very soon.”

ESB Networks said they are investigating the cause of minor fire, and apologised to customers in the area for the inconvenience caused.