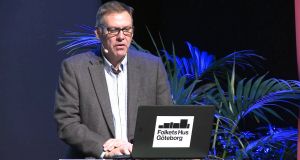 Jon Sigfusson, the Icelandic director of the Planet Youth project, said imposing guilt on children and penalties on suppliers does not decrease substance abuse amongst teenagers.

Iceland’s success in cutting substance abuse among teenagers may be tested in the west of Ireland with a pilot scheme involving 7,000 young people.

Imposing guilt on children and penalties on suppliers will not work, as the issue is a societal one, Icelandic director of the Planet Youth project Jon Sigfusson said in Galway.

He outlined how his country’s project was so successful that Iceland went from having one of the highest to one of the lowest rates of substance abuse by teenagers over a 20-year period.

The initiative is now being tested in 18 countries in Europe, along with Latin America and several African states.

Mr Sigfusson, who was invited to Galway by the Western Region Drugs and Alcohol Task Force, said that children are not responsible for their own well-being and parents must take a greater role.

“Children are not to blame for not reading a brochure that somebody gives them about drugs, they are not responsible for their own well-being – we are, the whole society,” he said, and the problem could not be tackled by a government on its own.

Imposing higher prices or marketing restrictions would not prevent alcohol abuse, he said, given that that one of Iceland’s jokes was that one needed to be a millionaire to have a drink problem.

Rather, creating an unattractive environment around alcohol misuse was more likely to be effective, he said.

Contrary to what parents might think, surveys done by Planet Youth had found that children wanted their parents to know where they were at night.

“They don’t want their parents to have no interest,”Mr Sigfusson said. For this reason parental factors were key, he said, adding that giving children parental time, support, care and warmth were crucial.

Access to activities, not just sport, are vital, and success can be seen at a local level with community involvement, he said.

The scheme gathers evidence from teenagers at a community level through a 27-page survey, which informs community workers about the lives of the teenagers. The information pinpoints risk factors.

“When you have this information on the table you can take it to government and say ‘listen here is something that needs to be addressed’,” Mr Sigfusson explained.

“Sometimes it’s a governmental thing and the government can do it through legislation, sometimes the people in the local communities can use it and they don’t need to go to government for everything,” he added.