Report calls for law on purchasing sex to be repealed 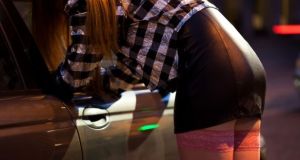 Commissioned by HIV Ireland, the small-scale study looks at how the Part 4 of the Sexual Offences Act (2017) has impacted sex workers.

Sex workers feel less safe, more stigmatised and in greater fear of gardaí since a law criminalising the purchase of sex was enacted, a report from Maynooth university warns.

Commissioned by HIV Ireland, the small-scale study looks at how the Part 4 of the Sexual Offences Act (2017) has impacted sex workers.

The Act criminalises the purchase of sex and decriminalises sex-work. It remains an offence however for more than one person to do sex work under one roof as this is regarded as a brothel-keeping.

The report, which HIV Ireland is submitting to a government review of the legislation, says: “The findings . . . point to the negative impact of current laws on the abilities of sex workers to keep safe and reduce harms to their health and well-being, in line with mounting evidence from other jurisdictions where sex buyer laws are in place.”

It adds: “While some international women’s groups and radical feminists support the utility of such sex purchase laws to send a symbolic message on sexual behaviour there is little consideration of the impact on sex workers’ safety.”

Four focus groups, with 26 sex-workers were held in Dublin, Cork, Limerick and Galway, led by peers in the Sex Workers Alliance of Ireland.

Several women said the law did not protect them but judged them as victims.

‘Gina’ said: “Protection is a very open-ended idea, it’s like they more want to protect you from yourself and your evil ways these wretched women need to be brought into line and protected from themselves. That’s their version of protection.”

Several participants said they felt “monitored” by gardaí who were surveilling for their male clients. They described reluctance in reporting violence and feeling they would not be as respected as other members of the public reporting harm.

A migrant sex worker in the Galway group, who had been raped, decided not to report to the gardaí.

“When that thing happened to me I was afraid, I didn’t go to the police because I didn’t know the consequence so I prefer to stay at home . . . But it’s society, so we can’t change their minds, the way they think about us.”

The legislation means sex workers are regarded as operating outside of the law, says the report.

“So, as data from this study shows, show, sex workers perceive this to mean that abuse, harassment and violations of rights to services, supports, health and housing are justifiable to wider society.”

Participants described feeling vulnerable as they could not work in twos or three in apartments, but had to work alone due to brothel-keeping legislation.

‘Lee’ in the Dublin group said: “The police are cracking down, they aren’t even pretending that enforcing this law is something that is about sex workers as victims, and protecting women . . . They’re doubling down on the brothel-keeping law in just sweeping rates.”

The report calls for the law to be repealed, to recognise the reality of sex work and keep those involved in it safe.

The report is written by Dr Paul Ryan and Dr Kathryn McGarry, of the Department of Sociology at Maynooth University.

A spokesman for the Department of Justice said the deadline for making submissions to the review had been extended until 19th September.