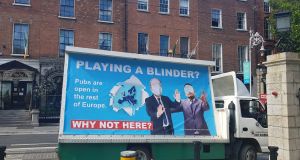 The publicans were accompanied by a 30-foot a billboard featuring the Taoiseach and Tánaiste blindfolded under a caption ‘Playing a Blinder? Pubs are open across Europe. What not Here?’ Photograph: Patsy McGarry

Four Co Monaghan publicans protested in Dublin on Thursday at the ongoing closure of ‘wet’ pubs due to the Covid-19 pandemic and had a brief meeting with Taoiseach Micheál Martin.

The publicans were accompanied by a 30-foot a billboard featuring the Taoiseach and Tánaiste blindfolded under a caption ‘Playing a Blinder? Pubs are open across Europe.What not Here?”

Representing local organisation, Monaghan Publicans for Common Sense, Brian Renaghan from Clontibret, Noel McNally from Castleblayney, Raymond Dignam from Carrickmacross, and Patrick Boylan from Ballinode in north Monaghan, met the Taoiseach near the Mansion House where he had been launching the ‘Stay and Spend Scheme’.

Speaking after their meeting, Mr Renaghan, said the pub business was their livelihood.

“We’ve all kids, we’re rearing families and all the rest. We explained all the difficulties we had. All of us got involved in the conversation and he listened to us and he engaged with us. He knows now in no uncertain terms what we need and where we are.”

Addressing the issue on Thursday, Mr Martin said guidance on the issue of pubs being reopened is being worked on.

“We would love to see not just pubs open . . . we also want crowds back albeit smaller crowds at sporting events,” he said.

The issues will form part of the Government’s new long-term roadmap for living alongside Covid-19, due out on September 14th.

“We’re financially gone. He said ‘we’ll look at more packages’ . . . but it’s only ‘looking’. We don’t expect much. We’re hearing that all the time.”

Asked whether they could survive to the end of this year, Mr McNally said “a lot of us won’t”.

The publicans had no great expectation of the meeting.

“I don’t think we were expecting anything, it was more or less about getting our point across,” said Mr Renaghan.

They impressed on the Taoiseach how publicans had co-operated in implementing the smoking ban and could be trusted in abiding by Covid-19 restrictions.

“What’s the difference, and it’s only three mile over the road. It’s galling to see that going on. It’s very, very disheartening. And no remarks passed. Then the grants they’ve got over there too. Restart grants and all the rest, far superior to what we’ve got. It’s very hard to cope with that.”

It was “why the Monaghan publicans took this stand here today”.

“Because we’re a border county, like Louth and Donegal, we took this on ourselves to do this,” he said.

Mr McNally added: “we’re losing about €2,000 a month for expenses to keep the pub closed. If you’re looking at a bank account dripping every week and having to go around ask family members for money, it’s not nice.”

Serving food was not practical, they said.

“I’m a rural pub in the village and there’s no chip shop beside me, no pizza outlet or Chinese, so someone would have to travel seven mile to go and get it and take it back. And then to put in a kitchen, the expense of that, it wouldn’t stop at €60,000. Where am I going to get that?” asked Mr Renaghan.

Mr McNally said that on “an ordinary night, Monday to Friday, I’d be lucky if I’d 10 at one time in the pub. And that’d be a big crowd. Some nights you may have a hurling meeting, or of a housewives. They mightn’t be drinking. I often see some nights I’d call them the pioneer club, never have a drink at all, just walk in, ‘water, have you not the heat on?’ But that’s part of the game, you’ve to take the good with the bad.”

He continued: “If we got the chance to open we don’t mind what hours what restrictions, let us open.”

As to the impact of the long closure Mr McNally said it was “not good”.

“I don’t want to get up in the morning. It’s a sad thing to say that you’ve nothing to get up for, I worked - what- 40 years behind a counter.”

Some publicans were “in an awful way and distressed. One man cried in front of me”.

Patrick Boylan has been running his pub in Ballinode for 30 years.

“My mother had it for 40 years before that, nearly,” he said, while Raymond Dignam’s pub in Castleblayney “has been in the family for five generations”.