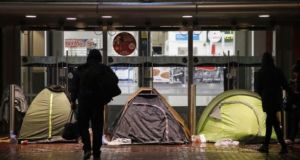 The Dublin Simon Community has reported an 18 per cent increase in demand for homeless healthcare services. File photograph: The Irish Times

A homelessness charity in Dublin made an average of two “critical interventions” to people with suicidality per day last year, according to its annual report.

The Dublin Simon Community said that 53 per cent of residents in emergency accommodation centres required mental health support – the vast majority of whom (90 per cent) have additional physical health or addiction issues.

According to the charity’s 2019 annual report, published on Thursday, there was an 18 per cent increase in demand for homeless healthcare services, such as residential detox, addiction recovery and blood borne virus services.

The charity provided access to treatment to 1,281 people last year.

The charity’s homeless-specific counselling service, Sure Steps Counselling, provided 2,850 hours of counselling in 2019, up 17 per cent on the previous year.

Almost 20 per cent of those hours were crisis interventions for suicidality – an average of two per day.

Sam McGuinness, chief executive of the Dublin Simon Community, warned of the possibility of a “health crisis” among the homeless population as a consequence of “health underfunding” and increasing homelessness numbers due to accommodation constraints.

Health funding for homeless services has decreased by 54 per cent per person since 2014, the charity added.

“Demand for treatment services to meet the critical health needs of our homeless population has grown throughout 2019 with further growth experienced this year due to the impact of Covid-19,” Mr McGuinness said.

“Within our own treatment services we are presently faced with an ongoing funding deficit of at least €1 million per year.”

“Our analysis of this population showed that 36 per cent of people have been homeless for more than five years, and two-thirds of them are aged between 25 and 44,” he said.

Mr McGuinness called on the government to provide additional funding to meet the health needs of the homeless population.

Majella Darcy, head of treatment services in Dublin Simon Community, said the increased challenges created by the Covid-19 pandemic required the charity to take “a whole new approach in the way we deliver services”.

“Services such as counselling moved online and virtual, and we implemented an emotional support freephone service for the homelessness sector. In the first seven weeks of operation this service delivered 300 hours of phone counselling,” she said.

“We expect these services to be under continual pressure while the pandemic is still active.”

The annual report was by unveiled on Thursday by Lord Mayor of Dublin Hazel Chu on Thursday, who described the charity as a “part of the fabric of Dublin society”.