Quotas for young people in politics suggested to attract them 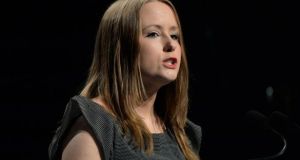 Deputy Mairéad Farrell (Sinn Féin) was elected to Galway City Council when she was 24 and she would encourage young people who were interested to ‘go for it’. File photograph: Dara Mac Dónaill

Quotas for young people in politics, similar to gender quotas, and lowering the voting age to 16, were among the measures needed to attract young people into politics, an online forum heard on Thursday.

Hosted by the independent think-tank Tasc and titled Fit for purpose? Does traditional politics work for young people?, it heard from a range involved in activism, the media and the Oireachtas.

Amanda Adewole, a youth worker and presenter of the Box’d Out podcast, said when she heard the word ‘politics’ she thought “middle aged white men.

“The only way that’s going to change is by breaking down barriers and making politics a space for younger people. Politics can feel very far away and dominated by older people so you can feel a bit removed from it almost”.

She said young people felt generally disrespected by politicians. There was a widespread preconception “that young people have nothing to add to the conversation” which put them off getting involved.

Aoife Grace Moore, political correspondent with the Irish Examiner, said she wished there was no need for quotas but “there are so many unconscious biases”. People from diverse backgrounds and age cohorts needed to be visible in politics if it was to be relevant.

Mairéad Farrell, TD (Sinn Féin) said quotas were necessary to ensure politics were “reflective of the whole of society”. She was elected to Galway City Council when she was 24 and she would encourage young people who were interested to “go for it”.

Key, however, would be central government devolving more power to local authorities’ councillors.

“If we want to get people more involved in local politics we need to be able to say, ‘You can achieve things’. We need more power at local level, absolutely.”

Senator Malcolm Byrne agreed with a call from a viewer for the voting age be reduced from 18 to 16 and rejected fears that young people would vote for populist candidates. They were no more likely to than any other age group to, he said.

“I agree with the vote at age 16, especially for local elections, as there would be no need for a Constitutional change, just a legislative one. There is a commitment in the Programme for government of looking at that and I know government has been looking at the Scottish model.”

Many people her age were passionate about campaigning for climate justice because “it really is a matter of life and death . . . I don’t want to wake up in 50 years and look at the news and see the world dying, thinking to myself I could have done more”.