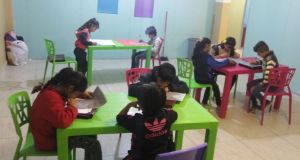 Children being taught under the schools programme for Insan, a Lebanese NGO in Tyre.

A Dublin priest back in Ireland for a short break from a refugee camp in Lebanon has appealed for help in transporting about 600kg of donated supplies and personal protection equipment (PPE) back to that troubled country.

Most of those he is helping in the camp near the coastal city of Tyre are Syrian refugee children.

Fr William Stuart (59) is from Clontarf in Dublin. He is a Rosminian priest and works as a volunteer with Insan, a Lebanese NGO in Tyre, as well as in the refugee camps. He has had an involvement with the Middle East since 2003, as well as serving in Dublin.

Back briefly in Dalkey parish, where he has served previously, he is due back in the Lebanese camp by September 14th. In 2018, he set up a school in the camp at Tyre “to get street kids who are long term out of school into some form of learning”. To date the camp has remained Covid-19 free.

They teach 54 children aged eight to 17 and “have been distributing worksheets three times a weeks in Maths, Arabic and English”, he said.

They have also been providing basic supports to the children and their families with “a food hamper of dry goods weekly and rent support where eviction is being threatened”.

Last Spring, with news of an impending Covid-19 pandemic, other NGOs working in the camp went to ground with their staffs working from home, leaving the refugees with little aid. Fr Stuart and his colleagues have stayed on.

“We are frontline people who don’t have the luxury of ‘working from home’ nor can we abandon the most vulnerable in this most difficult of times. To my disappointment this view is not shared by the NGO sector who have wholescale abandoned ship,” said Fr Stuart.

There was a generous response to an appeal by Fr Stuart last May, particularly by parishioners in Dalkey and Irish Times readers.

Since returning to Ireland he has accumulated so much in donated clothing, laptops, schools supplies and equipment, as well as PPE, his main problem now is in finding a way to transport it back to the camp near Tyre.

“People have been very, very generous,” he said. Anyone who may be able to help with transporting this aid to Lebanon, or who wants to support Fr Stuart’s work in general, can contact him at stresa2@gmail.com

1 More than 30 people queue overnight to secure property in Carlow
2 Coronavirus: Further 430 cases reported in State most in day since April
3 Gardaí appeal for information on rape of teenager in Co Mayo playground
4 Man with electric scooter who died in Meath was due to get married in the coming weeks
5 Traffic volumes show Donegal locking down to greater extent than Dublin
Real news has value SUBSCRIBE

Coronavirus: Further 430 cases reported in State most in day since April 18:50
UCC students face expulsion if they breach Covid-19 guidelines 18:20
Post mortem on man who died in Navan expected to confirm hit and run 18:07
Hospitality industry suffers another blow as New Year’s Eve festival is cancelled 17:23
More than 30 people queue overnight to secure property in Carlow 17:00