One man’s global campaign to help children of priests

Guidelines agreed through efforts of cleric’s son Vincent Doyle, but not published yet 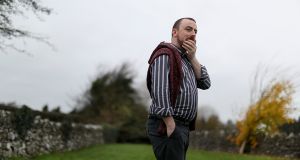 Vincent Doyle pauses at a scenic spot above the River Shannon where his father, Fr John J Doyle, often took him. Vincent did not know the priest was his father, but knew him as his godfather. Photograph: Suzanne Kreiter/Boston Globe

It was the early 1980s when they first met at a wedding in Co Cavan.

She was a married mother of three.

Fr Doyle (JJ) arranged for his transfer back to Ireland, to the diocese of Ardagh and Clonmacnoise, and to Longford town near where she lived. The priest would later serve in Ardagh, Co Longford, and finally in Edgeworthstown, where he died of lung cancer in June 1995.

By then, his son Vincent was 12. He would be 28 before his mother acknowledged that Fr Doyle was his father. As a boy, he had a very good relationship with the priest, who was also his godfather, he told The Irish Times. “I spent a lot of time with him,” he said.

It was, he feels, probably his father’s influence which later led him to Maynooth where he took a degree in theology, philosophy and English. He then studied for a Master’s degree in chaplaincy and pastoral care at the Mater Dei Institute in Dublin and spent a year at a seminary in Spain before deciding the priesthood was not for him.

He has since qualified as a psychotherapist and become engaged. He remains a practising Catholic, with no desire to hurt the church.

It was in 2012 he first had the idea of setting up a website for people like himself whose fathers were priests. It arose from a discussion he had with a woman who was a priest’s daughter.

He went to see then papal nuncio Archbishop Charles Browne, who was very supportive and arranged for him to have a front seat at a general audience in Rome with Pope Francis on June 4th, 2014, the anniversary of his father’s death.

There he passed a letter in Spanish to the pope, later acknowledged. He had sent a similar letter to the Irish Catholic bishops, asking what they proposed to do about children fathered by priests.

Back in Ireland, he went to see Archbishop of Dublin Diarmuid Martin who, as with Archbishop Brown, he found “very accommodating”.

When he mooted the idea of a website, Archbishop Martin was “very encouraging, really helpful, saying we should do it right”. The Archbishop agreed to fund the new website, www.copinginternational.com.

In 2015, Doyle contacted the Spotlight team at the Boston Globe in the US as “I wanted the story to go international”. They asked him to keep all under wraps while they researched the story more broadly. He agreed to do so. This week the Boston Globe ran a series on children fathered by Catholic priests.

In the interim, Doyle continued contacts with the Irish bishops. They finally agreed the Principles of responsibility regarding priests who father children while in ministry, yet to be published by the bishops in Ireland.

A spokesman for the bishops said yesterday that the text was originally drafted in response to a request from Vincent Doyle.

“The principles, having been approved in draft form by the Spring 2017 plenary meeting of the Irish Catholic Bishops’ Conference, were sent to Vincent for his review. Having been favourably received by him, the principles were signed off by the Standing Committee at its meeting on May 29th and were forwarded to Vincent on that date.”

Asked why these principles had not been announced publicly, or published since on the Catholic Bishops’ website or any diocesan website, or referred to in the published summaries of the bishops’ 2017 spring or summer meetings, the spokesman said, “it was presumed that Vincent would publish these principles as he saw fit as part of his raising awareness of this issue.”