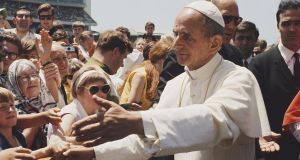 Pope Paul VI began the practice of papal travel outside of Italy, and was successful in improving ecumenical relations with Protestant and Orthodox churches. Photograph: Getty Images

The Vatican’s Congregation for the Causes of Saints on Tuesday approved the second miracle needed for the canonisation of Blessed Pope Paul VI. The canonisation ceremony is likely to take place later this year.

Pope Paul VI succeeded Pope John XXIII in 1963 and was pope until 1978 when he was succeeded by Pope John Paul II.

Pope Paul VI concluded proceedings of the Second Vatican Council – begun by his predecessor, began the practice of papal travel outside of Italy, and was successful in improving ecumenical relations with Protestant and Orthodox churches.

However, July 25th next will mark the 50th anniversary of what was probably the most controversial decision of his papacy when he published the encyclical Humanae Vitae (Of Human Life).

It reaffirmed the Catholic Church’s teaching banning all artificial means of contraception, including the pill and the condom, when there was a widespread expectation he would do otherwise.

This second miracle attributed to Pope Paul VI concerned the healing of an unborn in the fifth month of pregnancy. According to the Catholic News Agency the mother, from Verona in Italy, had an illness that risked her own life and the life of her unborn and was advised to have an abortion.

A few days after the beatification of Paul VI by Pope Francis in October 2014, the mother prayed to the now Blessed Paul VI at a shrine in Lombardy and the baby girl was later born in good health.

The first miracle involving Pope Paul VI took place in California in the 1990s. It also concerned an unborn which was found to have a serious health problem that could mean brain damage. Doctors advised that it be aborted, but the mother entrusted her pregnancy to Paul VI. The child was born healthy.

On the basis of that miracle Pope Francis beatified Blessed Paul VI in October 2014, at the conclusion of the extraordinary Synod of Bishops on the Family.