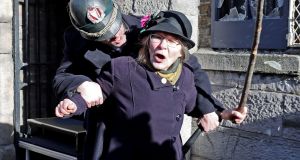 At 5am on the morning of June 13th, 1912 Hanna Sheehy Skeffington, Irish suffragette and dedicated Republican, crept along the cobbled roadway of Ship Street toward the back entrance of the then British-run Dublin Castle. Armed with a wooden stick, the 35-year-old campaigner for women’s rights proceeded to smash the window panes of a castle window before being arrested by a police officer.

Nearly 106 years later on a cold February morning, her granddaughter, Dr Micheline Sheehy Skeffington stood outside that same window holding a long wooden pole and dressed in an outfit dating back to the turn of the 20th century. However, this Sheehy Skeffington was not alone in her act of vandalism but surrounded by a large crowd of onlookers who cheered and whooped with joy as the granddaughter of the famous Irish suffragette smashed the windows of Dublin Castle.

Tuesday’s re-enactment of Sheehy Skeffington’s defiance against male rule marked exactly 100 years since the Representation of the People Act was introduced which allowed women over 30, who had property rights or a university education, to vote for the first time - only in 1928 did women finally achieve equal voting rights with men.

Dozens of cameras flashed and microphones were held aloft as Dr Sheehy Skeffington posed for photos in the bright winter sunshine at the pedestrian walkway leading from Ship Street to Castle Street before taking to a small podium at the entrance to the Castle. “I’m going to say a few words even though I’ve already been led away and arrested,” she joked after shattering the final pane of glass outside the Dublin Castle archway.

“We forget how much these women put themselves through. The reason they smashed the windows in 1912 was because they were fed up with the way the Irish (Parliamentary) Party would have nothing to do with the suffragettes or votes for women. Home Rule was going through for half the population; it was home rule for men but not for women.”

Hanna Sheehy Skeffington spent two months in prison before going on hunger strike in solidarity with her fellow suffragettes fighting for the cause in Britain. “That’s incredible courage,” said her granddaughter. “It takes things like that to change the system.”

Dr Sheehy Skeffington commended the Oireachtas Vótáil 100 centenary programme but criticised the National Museum and An Post for their failure to mark 100 years since Irish women were given the right to vote. “The (An Post) special stamps this year don’t even mention the suffrage movement. John Redmond is getting a stamp and he was the head of the Irish (Parliamentary) Party who refused to include women.”

*A statement from An Post later clarified that it would be releasing two stamps on October 18th, 2018, under the title Popular Democracy, including one depicting Hanna Sheehy Skeffington to mark Irish women’s right to vote. The second stamp will show Éamon de Valera to mark Sinn Féin’s victory over the Irish Parliamentary Party in 1918.

One hundred years on from the suffragette movement, Dr Sheehy Skeffington noted that Irish society still has a long way to go in establishing complete equality between women and men. “My grandmother might be impressed that we’ve had two female presidents but at the same time have we actually got equality? Things have improved in some ways, we have more representation... but there’s not that much respect in some levels. There is a sea change happening with movements like Waking the Feminists and MeToo but it takes enormous courage to stick with it.”