Vandals urinate and defecate in Protestant church in Derry 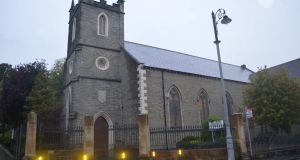 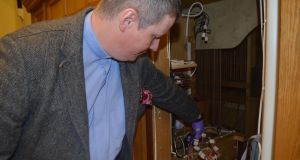 Church leaders and politicians in Derry have condemned vandals who broke into a Protestant church in the city and urinated and defecated inside it.

The Church of Ireland Bishop of Derry and Raphoe, the Rt Rev Ken Good, described the attack - on Christ Church in Infirmary Road - as “sacrilege”.

The break-in was discovered by a parishioner who called to the church on Tuesday evening.

It is believed the vandals smashed a stained glass window to enter the church, and then attacked the church organ.

The Rector of Christ Church, Archdeacon Robert Miller, said those responsible smashed a panel behind the organ, where its inner workings are housed.

“They climbed in behind the organ and used broken glass - probably from a bottle of altar wine which they’d smashed - to cut parts of the mechanism which makes the organ work,” he said.

A glass decanter which had been presented to the church by former parishioners, was stolen. A number of windows were also smashed and vases of flowers knocked over, and a Bible was removed from the lectern and flung into the church sanctuary.

Archdeacon Miller said the attack on the church had upset the woman who made the discovery and was distressing to members of the congregation.

“Police have yet to establish a definite motive,” he said, “but it appears to have been a case of wanton vandalism.

“It will be a real trauma for parishioners who worship here and for our neighbours across the road at St Eugene’s [Catholic] cathedral with whom we have the most wonderful relationship.”

The church is known for its musical recitals and its organ is regarded as one of the finest instruments of its kind in Ireland. The organ has been extensively damaged, and is likely to be out of operation for a considerable period of time.

“Our church organist was heartbroken when he saw the extent of the damage,” said Archdeacon Miller. “The instrument was installed in the year 2000, after the previous organ had been destroyed in a fire, so this latest act of vandalism has come as a severe blow to us.

“We’ve already been offered support from the local community and from friends farther afield, and it will come as a great comfort to our parishioners to know that they aren’t alone.”

Bishop Good said the attack was another setback for parishioners who had faced many challenges, including an arson attack 21 years ago which seriously damaged the church.

“I feel compassion towards those who did this,” the bishop told local radio, “because I don’t know what their lives amount to if this is what they have to contribute to society.

“There are greater things they could be doing with their lives than this.

“The people who would perpetrate such an outrage are small in number and in no way represent the vast, vast majority in our community who want to live in peace and harmony,” he said.

The Catholic Bishop of Derry, Dr Donal McKeown, visited Christ Church and conveyed his horror at the incident, as did politicians from the DUP, Sinn Fein and SDLP.

Archdeacon Millar has invited everyone in Derry to Sunday morning’s service at Christ Church to show their solidarity with the parishioners.

How to get ready for a graduate scheme 05:00
Job hunting amid the pandemic: Five pointers to help you find that role 05:00
Coronavirus: Council tenants who have parties ‘risk eviction’ 02:58
Gardaí used spit hoods on at least 14 people with mental illness 02:17
'Worrying trends': Waiting game in play as officials monitor Covid cases 02:04