Vatican’s stance on children’s rights is not acceptable, says McAleese 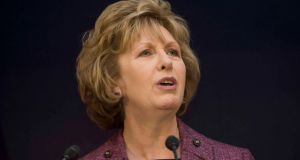 Prof Mary McAleese says it is “misleading” of the Vatican to tell the committee in 2013 that the terms “corporal punishment” or “punishment” were not used in the “Catechism of the Catholic Church”. Photograph: Daragh McSweeney/Provision

It was “downright wrong” and “misleading” of the Vatican to tell the UN Committee on the Rights of the Child (CRC) that it did not promote corporal punishment for children, former president of Ireland Mary McAleese has said.

“The Holy See has a long tradition of supporting corporal punishment,” she said. It was also “misleading” of the Vatican to tell the CRC in 2013 that the terms “corporal punishment” or “punishment” were not used in the Catechism of the Catholic Church, and that it did not use the term “illegitimate”.

Prof McAleese was speaking in an address to the Royal Irish Academy in Dublin on Tuesday on “The Holy See and the 1989 United Nations Convention on the Rights of the Child – is a once-promising journey now going backwards?”

She said the Vatican’s “prompt ratification” of the convention on the rights of the child in 1990 “was highly significant for, by any standard, the Holy See is a major contributor to and influencer of the lives of children world-wide”.

“It governs the faith lives of 17 per cent of the entire world population; that is, 1.25 billion Catholics, of whom well over 300 million are children aged under 18. It is the biggest non-governmental provider of educational and welfare services to children in the world operating over 200,000 schools across five continents catering for some 60 million children a majority of whom, according to the Holy See, do not profess the Catholic faith.”

This “initial enthusiasm for the convention has given way to complaints”, she said, the nub of which “is that the CRC says the Holy See must implement the convention within the internal jurisdiction of the Catholic Church, that is to say within church teaching and canon law for the benefit of its 300 million child members”.

However,“the Holy See says it is only obliged to implement the convention within the tiny territory of the Vatican City State which has no more than a handful of children”, she said.

Of the Vatican’s “misleading” report to the CRC in 2013, she said the Catechism of the Catholic Church “tells parents in the words of the Old Testament Book of Sirach 30:1-2: ‘He who loves his son will not spare the rod.’”

The full quotation from that section of the Old Testament “makes it clear that physical punishment of children is regarded as an appropriate form of discipline: ‘Bow down his neck while he is young, and beat his sides while he is a child, lest he grow stubborn, and regard thee not, and so be a sorrow of heart to thee,’” she said.

Where the term illegitimacy was concerned, she pointed out that the church’s 1983 code of canon law, its “own international law”, uses the term “illegitimate” in canon 1139.

“A question which the Holy See must answer therefore is why it believes it can credibly disseminate to the world at large the principles of a treaty (convention on the rights of the child) which it has ratified but refuses to implement within its own internal jurisdiction, particularly when that jurisdiction operates a body of law and principles which directly impact the lives and rights of over 300 million children,” she said.