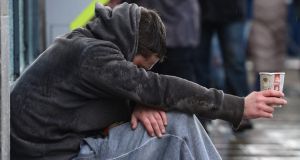 In the past 12 months, North Leitrim Men’s Group has dealt with two clients who were homeless, including one man in his early 20s. Photograph: Alan Betson

Reduced social-welfare payments for young adults is helping to drive them into homelessness, even in rural areas, according to a Leitrim-based men’s group.

Eilis Barry, chief executive of the legal rights organisation Flac, says it is so concerned about the issue nationwide that it is interested in taking a constitutional challenge on behalf of someone on an age-related reduced payment who is homeless as a result.

The Jobseeker’s Allowance for 18- to 24-year-olds was increased by just €2.70 in the last budget to €102.70, while the rate for 25-year-olds is €147.80 – considerably less than the standard payment of €193 a week. The National Youth Council of Ireland has described the reduced rates as “inequitable and age discriminatory”.

Marie Finney, a Northwest Simon outreach worker in Leitrim, believes that the low payments can be a contributory factor for homelessness and says there is an expectation that young people can depend on family for support but this is not always feasible.

In the past 12 months, North Leitrim Men’s Group has dealt with two clients who were homeless, including one man in his early 20s.

Ms Finney said that while the county council did its best to help people facing homelessness, she had encountered crisis situations.

“I have had people sleeping in tents, in cars, in derelict houses, and young people sleeping in building sites,” she said. She said that for complex reasons these people might not fulfil criteria, making them the responsibility of the local authority.

“They have to be from the area, or have a good reason to be staying in the area, which might require a letter from a Garda or a social worker, but not everyone is involved with either,” she said.

In a statement, Leitrim County Council refuted “any suggestion that people are being forced to sleep in derelict buildings or other such places and would advise that any such household should make contact with the local authority”.

The council acknowledged that 17 households had presented as homeless up to the beginning of June, five of which did not meet the “relevant eligibility criteria”. Eighteen households presented as homeless in the county in 2016. Five of the 17 households who presented this year had been offered local authority accommodation, five were offered the Home Assistance Payment , one was accommodated outside the county and one was asked to provide further documentation.

Last week the council, which has more than 370 households on the waiting list, got an allocation of €3.7 million under the Rebuilding Ireland Programme for the construction of 24 social housing units.

Mr Smith questioned why 18- to 25-year-olds who were entitled to vote were being “disenfranchised” by the State when it came to their income. “They are being told they are second-class citizens,” he said. “Where is the lobby for young people. The government would not get away with doing this to the older generation.”

The Department of Social Welfare said the rationale for the lower rates was to “prevent young, unemployed people from entering longer-term welfare dependency by providing a strong financial incentive to take up a job, or a training or education programme”.

A spokeswoman said jobseekers under 26 who have children are not subject to the reduced rates of jobseeker’s allowance.