Two-thirds of Catholic dioceses do not publish accounts online 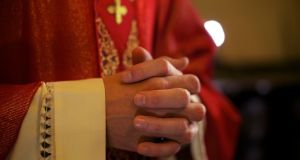 More than 60 per cent of the Catholic dioceses on the island of Ireland presented no financial information on their websites at all. Photograph: Getty

Almost two-thirds of the 26 Catholic dioceses in Ireland do not publish any financial details on their websites, a new survey has found.

The reverse is true in the US, where almost two-thirds of the 177 dioceses carry such details on their websites.

The Irish survey was carried out by We Are Church Ireland, a lay Catholic lobby group, which has called for greater transparency in diocesan finances.

A summary of the financial details of each diocese, and other relevant charities in each, are published on the Charities Regulatory Authority website.

However, the level of detail made available to parishioners on diocesan websites varies significantly.

The survey of the 26 Catholic dioceses on the island of Ireland found that 62 per cent presented no financial information on their websites at all.

Only five Irish dioceses publish audited accounts on their websites: Down & Connor in Northern Ireland, Dublin, Elphin, Limerick, and Ossory.

Only 58 per cent of dioceses identified members of their finance committee on their websites.

The survey was carried out to compare against a recent poll by the US lay liberal Catholic group Voice of the Faithful, which showed that 34 per cent of the 177 dioceses there did not include any financial information on their websites.

Commenting on the findings, Colm Holmes of We Are Church Ireland said, “Congratulations to Ossory, who top the table with their audited 2016 financial statements available on their website”.

“But it is disappointing to see Armagh in midtable, though we found a note on their website saying the proper publication of financial statements ... is a priority. Also disappointing is to see a large diocese like Meath at the bottom of the table.”

Pope Francis, he said, “has put a strong emphasis on financial reporting and transparency”.

“Strangely enough, Canon Law does not require financial reporting by dioceses. But with all monies for the church raised by donations from all the people of God over many centuries, surely in the 21st century our dioceses should be publishing annual financial reports?”

In Ireland, the drive for financial reporting and transparency is being driven by the Charities Act 2009 and the UK Charities Acts 2008 and 2013 for Northern Ireland, which also apply to the dioceses as charities. There are also financial statements in the Companies Office covering many dioceses, parishes and trusts.

“But in this day and age the website is the shop window for all organisations and that is where this information should be available in each diocese,” Mr Holmes said.