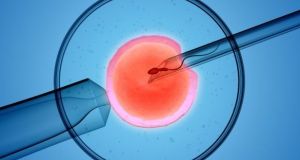 Since 1978, more than 6 million babies have been born through IVF across the world and over 2 per cent of European births are now through IVF. Photograph: iStock

It is “critical” that fertility treatment be publicly funded and legally regulated here, a pioneer in the field has warned.

Professor Simon Fishel, former chair in Human Reproduction at the University of Nottingham and founder of CARE Fertility in Britain, also predicts increasing numbers of young women will freeze their eggs or ovarian tissue to have babies later in life.

Prof Fishel is in Ireland for a number of events to mark the 40th anniversary of the birth of the first IVF baby. An internationally acclaimed specialist, he began his career in the 1970s working alongside doctors Robert Edwards and Patrick Steptoe at the University of Cambridge.

After 10 years and more than 450 failed attempts to help women have babies through in-vitro fertilisation (IVF), Edwards and Steptoe achieved success with the birth of Louise Brown, in Oldham, Manchester on July 25th, 1978. He also worked with them in the world’s first IVF clinic, in Bourn Hall in Cambridgeshire.

Since then, more than 6 million babies have been born through IVF across the world and over 2 per cent of European births are now through IVF.

Several private health insurers here offer coverage for fertility treatment. However, unlike in many European countries, including Britain and Germany, as well as in Israel and Australia, fertility treatment is not available to public patients, though this is being looked at by the Department of Health. Each attempt at IVF costs up to €5,000.

“It does mean poor people can’t have it,” says Prof Fishel. “It’s heartbreaking. That’s why public funding is so critical. Not only is it helping the individual but it’s helping society. Those children will contribute. Society needs them.”

Nor is the area regulated, though the Government has approved the draft of a general scheme of a Bill. A department spokeswoman said officials were engaging with the Attorney General on the Bill and the Oireachtas Committee on Health would review it in the coming term.

The spokeswoman said: “On the basis of equality and non-discrimination assisted human reproduction services will be available to people irrespective of gender, marital status or sexual orientation subject to . . . the welfare of the child.”

Prof Fishel said: “It’s very important to have regulation. It takes away the ambiguity about what doctors and scientists can do. It creates a social acceptance. Even though there might always be a group who are against it they will have less of a voice because regulation has decreed, through intellectual deliberations, what is right and what is wrong.”

Asked about future trends, he said “fertility preservation” would grow. This too should be publicly-funded. Frozen eggs are as likely to be successfully fertilised and implanted as freshly harvested ones, he said. It costs about €4,500 here.

With increasing pressures on women to continue working into their late 30s before having children, he asked why wouldn’t they freeze their eggs sometime between age 26 and 30.

“That’s why Facebook, Google are all offering to their female employees the opportunity to freeze their eggs. We can do egg-freezing here in Ireland and we know it works.” Public funding for this was “justified”, he said.

“I think if a society looks at how valuable children are, people should be assisted and helped to have them. Society needs them. Let’s welcome them into the world.”