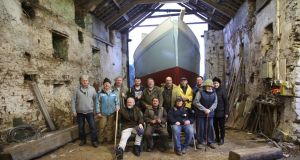 When Ireland’ s first round-world yachtsman Conor O’Brien designed and built a 56ft ketch more than 90 years ago, he was not to know that it would become the focus of a 21st-century cross-community project in his native Limerick.

Rebuilding of the Ilen, the last such ocean-going wooden ship built in Ireland, is almost complete and the vessel emerged from its shed into daylight early in the new year.

The seven-year effort has involved shipwrights and trainees attached to a maritime training workspace in Limerick, and at Hegarty’s boatyard in west Cork. Participating agencies have included Focus Ireland, Brothers of Charity and the Irish Wheelchair Association.

The Ilen project has been spearheaded by graphic artist and sailor Gary Mac Mahon, who secured the return of the ketch from the Falkland Islands 20 years ago and engaged the support of Liam Hegarty and a number of sponsors, along with much voluntary effort.

It was while in the south Atlantic with another ketch, the Saoirse, on his global circumnavigation from 1923 to 1925 that O’Brien was asked by Falkland residents to build a sister vessel for interisland trading.

On his return home, he designed the Ilen, named it after a west Cork river and launched it from Baltimore in 1926. He sailed it to Port Stanley in the south Atlantic archipelago, where it spent the best part of 70 years transporting sheep, goods and people.

Sections of the Saoirse, which was lost off Jamaica by a subsequent owner in 1979, have helped with the restoration project.

O’Brien, an Irish speaker, supporter of Home Rule and of Sinn Féin, was a sailor, mountaineer, naval architect and the author of 14 books. He was a “junior partner” in the gun running by Erskine and Molly Childers in 1914, using his vessel, the Kelpie, to land guns in Kilcoole, Co Wicklow.

He was related to the landowning O’Briens of the Shannon estuary, including the family of Lord Inchiquin, and the Spring Rice family of Foynes. He married and sailed with the artist Katherine Clausen, served at sea with British minesweepers and transatlantic delivery during two World Wars, and was known for his attention to detail and short temper.

After a visiting English journalist referred to the “ape-like” appearance of Irish people, he is reputed to have horsewhipped him on the steps of the Kildare Street Club in Dublin.

The Ilen is now “as eager as a young salmon to return to sea”, having been given new life with ribs of Irish oak, planks of European larch and a sailing rig similar to the original, Mac Mahon says. “Our plan now is to fit it up, step the mast, rig it up and undertake sea trials.”

The vessel will be sailed up the Shannon estuary to Limerick, where it will be based as a community training ship, alongside a fleet of “gandelows” or Shannon estuary rowing boats which the Ilen project has also constructed as part of its maritime education remit.