How Peter Sutherland tried in vain to stop the Eighth Amendment 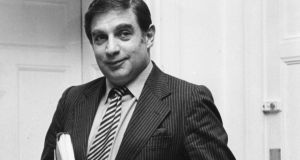 Peter Sutherland, whose funeral took place this week, was a central figure in the drama surrounding the introduction of the Eighth Amendment of the Constitution 35 years ago. As attorney general, he convinced then taoiseach Garret FitzGerald to oppose the wording of the so-called “Pro-Life Amendment”, which would ultimately be passed in a referendum in September 1983.

Sutherland wasn’t the only public figure at the time to express such concerns but what was unusual was the manner in which he used his official role as the State’s chief legal adviser to influence government policy – to the extent that he even drafted and agitated for an alternative wording for the constitutional provision.

His intervention throws up one of the intriguing “what ifs” of recent Irish history. Had Sutherland’s wording been accepted there would have been no X case, no C case and none of “the complicated case law which pits the life of the unborn against the life of the mother”, as Dr Laura Cahillane, law lecturer at University of Limerick, points out. Moreover, we might have ended up with a more robust ban, or at least restriction, on abortion – arguably much more restrictive than the 12-week limit regime now being proposed.

Sutherland first voiced his reservations to FitzGerald about the planned referendum during the Fine Gael-led coalition government of 1981-82, describing the proposal as a legal “time bomb” in a detailed correspondence.

State papers released under the 30-year rule show Sutherland’s advice was withheld from his successor – Patrick Connolly – when Charles Haughey came to power in March 1982. Nonetheless, the Fianna Fáil-appointed attorney general raised almost identical reservations, noting among other things that a “pro-life” amendment “might well have the effect of threatening the right of the mother” to have a life-saving operation.

When Connolly was forced to resign, his successor as attorney general John L Murray, was commandeered to advance the proposed amendment. Haughey was under pressure to deliver for the anti-abortion lobby and on November 2nd, 1982, two days before a vote of no confidence in the Dáil, which led to a general election the following month, the then Fianna Fáil government announced the wording: “The State acknowledges the right to life of the unborn and, with due regard to the equal right to life of the mother, guarantees in its laws to respect, and, as far as practicable, by its laws to defend and vindicate that right.”

FitzGerald surprised Haughey by committing Fine Gael to supporting the wording ahead of polling day. It was a decision he would later regret, writing in this newspaper in 1997: “I bear a share of responsibility for the debacle of the 1983 referendum.”

Having been returned as taoiseach, FitzGerald found in his in-tray a detailed filleting of the planned amendment by his legal right-hand man (Sutherland again). He foretold of unintended legal consequences, medical uncertainty and unpredictable Supreme Court rulings due to what he called the amendment’s “ambiguous and unsatisfactory” wording. Sutherland’s words had a powerful effect on fellow Jesuit-educated FitzGerald, who promptly did a U-turn and ordered his attorney general to come up with a new plan.

Sutherland produced what he called “the confirmative proposal” – an amendment giving constitutional protection for a legislative ban on abortion without affirming the right to life of the unborn. The wording ran thus: “Nothing in this Constitution shall be invoked to invalidate, or to deprive of force or effect, any provision of a law on the ground that it prohibits abortion.”

Previously confidential files released under the 30-year rule revealed how hard Sutherland pushed for this solution, criticising then minister for justice Michael Noonan for examining other options – that would have been politically more acceptable – without consulting him.

Sutherland told the government not to take the “soft option now”, and while he won the initial battle he ultimately lost the war. His wording was put before Fine Gael and Labour deputies who rejected it by a narrow margin, forcing the government to put the Fianna Fáil wording to the people.

What if Sutherland’s wording had triumphed? Dr Tom Hickey of the School of Law and Government at Dublin City University, says it’s “quite possible that, ironically, abortion law would be even more restrictive today than it is; ie that the X case – which, combined with much of what came afterwards – brought about the Protection of Life During Pregnancy Act – probably would not have happened”.

Then again, he says, “surely we’d have something like the Act, and probably – in the absence of ‘the Constitution’ as a block, or as a convenient shield – we’d have more liberal law on the question. The social wars would no doubt have played out, just taken a slightly different form.”

Whether, or to what extent, any government in the past 30 years would have revisited the law on abortion without pressure from the courts is an open question. However, Cahillane says, “It’s interesting all the flaws Sutherland pointed out did actually come to pass and his wording did avoid all of that.

Whatever about hypotheticals, Cahillane believes there is a lesson to be learnt from FitzGerald’s highly unusual decision to publish Sutherland’s advice ahead of the referendum. “Very often politicians hide behind the attorney general’s advice but we never get to see that advice.” While there are some areas where one shouldn’t make advice public, she says, “around referendums I think it would be a good idea”.