Pontiff ‘a complex figure . . . he knows when people are not being true to him,’ says prelate

In his Easter address Pope Francis called for peace in the Holy Land two days after 15 Palestinians were killed on the Israeli-Gaza border, saying the conflict there "does not spare the defenceless". Video: Reuters 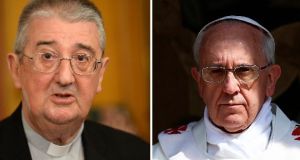 Archbishop Martin remembered meeting Pope Francis “the day that the story of the Tuam babies came out. He said to me ‘how are things in Ireland?’ ”

The Catholic Archbishop of Dublin Diarmuid Martin has not ruled out a visit by Pope Francis to Northern Ireland during his trip for the World Meeting of Families next August.

Asked whether the Pope would undertake a cross-Border visit, as appeared to be the wish of the Northern Catholic Bishops, Archbishop Martin said “the Pope is coming for the World Meeting of Families. If they were to organise an event around the family, that might make it easier. Not a political event.”

The Archbishop, who is hosting the World Meeting of Families 2018 in Dublin, was speaking to The Irish Times at Dublin’s Pro Cathedral following the Easter Sunday Mass there.

Asked about the presence of LGBTI+ people at the event, he responded: “I’ve said what I’ve said. I’ve spoken about them. Time heals.” He has said that the occasion would be inclusive of all families.

Earlier, in a sometimes emotional interview on RTÉ radio, he said would like the visit of Pope Francis “to be very inclusive. It’s a very short visit, I’m worried some of the protocol issues may take more time than meeting with the poor.”

While in Ireland he would like him to see “struggling families”, of refugees, prisoners and the poor. Also victims of clerical abuse: “There’s no way the pope can’t address that” and Travellers, who have the highest infant mortality, lowest life expectancy in Ireland.

Pope Francis is “a complex figure. Not all smiles. He’s determined, he knows when people are not being true to him, loyal to him. He may not be able to change it but he’s nobody’s fool. When he wants to do something he will do it”, said Archbishop Martin. The pope is “ a free man, that’s his real strength. He’s in nobody’s pocket and everybody around him knows that.”

He remembered meeting Pope Francis “the day that the story of the Tuam babies came out. He said to me ‘how are things in Ireland?’ And I said there’s a terrible story . . .”, at which point in the interview Archbishop Martin became upset, explaining, “ I get emotional when I’m tired.”

He continued:“I said to him there’s a terrible story emerging about children’s bodies being found. And afterwards a number of people came to me and said, ‘what did you say to the pope? He was visibly upset and he kept looking after you when you went away.’ He has that sensitivity to things.”

Archbishop Martin hoped “that the people around him . . . and that would include our own people, will allow him say what he wants to and what he should say”.

Recalling the trauma suffered in Dublin due to clerical child sexual abuse, he said young people were “horrendously scandalised by what happened. Young people lost confidence in the church” and had “found the cover -up and hypocrisy very hard to digest”.

He believed “this diocese got enormous benefit from the Murphy Commission (which investigated the handling of clerical child sexual abuse there). It brought out things that happened. We had to address them”. What annoyed him was that “there are still traces there of people who don’t understand that”.

As regards more recent stories about abuse involving the late Fr Malachy Finnegan, former president at St Colman’s College in Newry Co Down and former parish priest at Clonduff near Newry, Archbishop Martin said “the stories that are coming out about this man are horrendous. This man was horrible in the way he acted.”

He continued, “let the truth come out”. And if people don’t have confidence in a church investigation “get external people to verify”, he said.