Speakers at World Meeting of Families include 13 cardinals

Others taking part include George Mitchell, Mickey Harte and Anna May McHugh 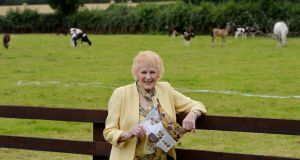 The first-ever debate on child safeguarding in the 25-year history of the Catholic Church’s World Meeting of Families will take place in Dublin in August, it has been learned.

The RDS debate, “Safeguarding Children and Vulnerable Adults”, will include Marie Collins, who quit the Vatican’s child protection commission last year in protest at the frustration of its work by Vatican officials.

The Dubliner, who was abused in the 1960s by a priest, will be joined by Cardinal Seán O’Malley, president of the Vatican’s Commission for the Protection of Minors.

Meanwhile, the liberal American Jesuit Fr James Martin will speak on the need for the church to show respect for LGBTQI+ people and their families.

His 2017 book, Building a Bridge (between the Catholic Church and members of the LGBTQI+ community) attracted widespread praise at senior levels in the church.

There can be no doubt that Fr Martin’s inclusion is a response to anger at the removal of same-sex images from preparatory booklets for the World Meeting of Families (WMoF2018) and the editing of a video dealing with same earlier this year.

He will be joined by Rocco Buttiglione, John Paul II professor of philosophy and history of European institutions at the Lateran University in Rome, who will speak on “A Hidden Treasure: The Theology of the Body of Saint John Paul II”.

In 2004 Prof Buttiglione was rejected as a member of the European Commission because he said homosexuality was a sin and, effectively, that a woman’s place was in the home.

If Fr Martin’s place is a signal to liberals, similarly, the inclusion of Prof Buttiglione has all the appearance of an attempt to appease the church’s more hard-line traditionalists.

Former US senator George Mitchell has been invited by the Vatican to be one of the key speakers. A central figure in the 1998 Belfast Agreement, he and former Northern Ireland politician Monica McWilliams will be among those taking part in a discussion on “Family as an Agent of Peace in a Turbulent World”.

Church of Ireland Archbishop of Dublin Michael Jackson and Archpriest Mikhail Nasonov, rector of the Dublin Russian Orthodox Patriarchal Monastery of the Church of Holy Apostles Peter at Harold’s Cross will speak on the first day of the pastoral congress, Wednesday, August 22nd.

Thirteen of the church’s most senior cardinals, including three of the nine-member Council of Cardinal Advisers to Pope Francis, will be in attendance.

Meanwhile, the church has already signed up 5,500 people to act as stewards and helpers for events in Croke Park, the Phoenix Park and the RDS during the four-day gathering.

However, 5,000 more are needed, and that number could rise. Volunteers must be free for a minimum of two to four consecutive days between August 18th and 29th, or just for the Phoenix Park Mass on August 26th.

Volunteers will be needed before the official start of the gathering, and afterwards. Applicants must be Irish resident and over-18. Further details from volunteer@worldmeeting2018.ie