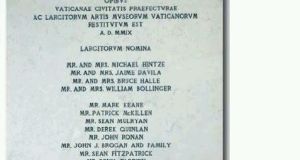 The plaque in the sacristy of the Vatican’s Pauline Chapel, completed at a cost of €9 million in 2009. Photograph: Patsy McGarry

The third national collection to help fund the visit of Pope Francis and the World Meeting of Families in Dublin (WMoF2018) next August takes place in parishes across Ireland this weekend.

Archbishop of Dublin Diarmuid Martin has estimated the cost of both at €20million. He said the two national collections which took place last year brought in €5 million.

He did not rule out help from the Vatican and, when asked about the State, said he believed a visit by Pope Francis would be treated the same way as the 2011 visits of Queen Elizabeth and US president Barack Obama.

Speaking in the Dáil last month Taoiseach Leo Varadkar said “even though it is not formally a State visit the assistance provided to Pope Francis will be the same as if it were.” His department was assisting Church authorities in the organisation and preparation of the visit, he said.

A spokeswoman for the WMoF2018 said funds raised in the national collections would help defray costs of hosting the gathering and the papal visit “which has yet to be confirmed.” She expected there would be at least one more national collection, possibly in June. To date “the response of the Irish people had been “really encouraging” she said.

Funding is also being sought from likely contributors in the Irish business world and from Irish America, including those who helped fund the last World Meeting of Families at Philadelphia in 2015.

Broadcaster Norah Casey, who earlier this month was presented with the Philanthropist of the Year Award, is on the fundraising committee for WMoF2018.

She said the committee has been in contact with the fund raising team for Philadelphia 2015, including US philanthropist Susan Davis.

Chairwoman of Susan Davis International, a global strategic communications and public affairs firm based in Washington, Ms Davis is Irish-American and a member of the board at the American Ireland Fund.

Irish-American firms which helped fund the Philadelphia meeting were being approached to help with meeting the costs of the Dublin event, Ms Casey said.

Locally “a number of Irish brands are involved but these had to be tested ethically,” she said, “these, and high net worth individuals, before they could be approached.They had to pass a test.”

This applied particularly to merchandising. When it came to cars they did not want “anything too flashy, considering Pope Francis’s attitude.” The materials used had to be environmentally sensitive and compatible with Pope Francis’s 2015 encyclical Laudato Si on care of the Earth, she said.

All of this was done “in a quiet, confidential way,” she said, and a list of eligible businesses and individuals was completed last month.

Irish business people have a history of generosity where the Catholic Church is concerned. In 2012 Denis O’Brien helped fund exhibits at the Eucharistic Congress in Dublin’s RDS, where many of the WMoF2018 are to take place.

He and other prominent Irish businessmen helped fund a restoration of the Vatican’s Pauline Chapel, completed at a cost of €9 million in 2009. This is marked by a plaque in the Chapel sacristy.