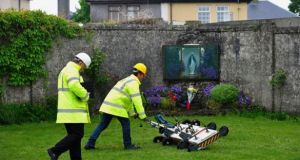 The remains of a significant number of juveniles were found at the site of the former mother and baby home in Tuam, Co Galway. Photograph: Aidan Crawley/EPA

Galway historian Catherine Corless, whose work resulted in the discovery of the remains of hundreds of babies and infants on the site of the former mother-and-baby home in Tuam, has urged members of the public to support full exhumation and DNA testing of the remains.

Galway County Council recently opened the consultation on options for the site following the publication by Minister for Children Katherine Zappone of an expert technical report in December.

In March 2017, the Mother and Baby Home Commission of Investigation confirmed the discovery of juvenile human remains, in “significant quantities”, in subsurface chambers on the site of historic sewage system at the former Bon Secours home.

That commission was set up in February 2015 after Ms Corless published research that revealed death certificates for 796 children at the Tuam home with no indication of their burial places.

In June last year, the minister appointed an expert technical group to outline to the Government what options were available for the site and for dealing with the remains.

While the technical report outlined five options – from creating a memorial to continuing examinations on the site – the Government has not made a decision on how to proceed.

At the request of the Department of Children and Youth Affairs, Galway County Council has opened a public consultation, which will close on Friday March 16th.

However, Ms Corless has criticised the nature of the process, stating it amounted to a “vote” on what to do with the site. She and many survivors of the home favour a full forensic investigation, exhumation and DNA testing.

The expert group said, however, that the situation in Tuam was “an unprecedented one for the agencies that usually deal with medico-legal death investigations in Ireland”.

It said it had not identified any directly comparable cases, either nationally or internationally, “that involve the complexities of commingled juvenile human remains, in significant quantities and in such a restricted physical location”.

“Unfortunately, it has come to this, that a decision will be made by a voting system,” Ms Corless said. She felt this was a “cold and callous” approach.

“However, if we can get enough people interested to fill in the form and show a preference for an all out forensic excavation, exhumation and DNA testing, the result will bring the long awaited justice to the families of the babies buried in this tank”

She said: “The Tuam babies deserve a decent burial in consecrated ground alongside their relatives. Memorialising them with a statue planked on top of the septic tank is only a further slight adding to the way their little bodies were discarded in the first place.

“Every vote and a few words of how you feel on the submission form will help us to obtain a final proper resting place for the Tuam babies.”

The forms must be returned to the council by post. It is separately holding consultation meetings for the survivors of the home, in Dublin and Tuam from March 1st to 9th.

During statements on the Tuam mother-and-baby home in the Dáil this month, Ms Zappone said there was “no intention to trivialise the memories or feelings of those wishing to partake in this process” through the consultation document.

Further details of the consultation are available at galway.ie or by email to TuamConsultation@galwaycoco.ie