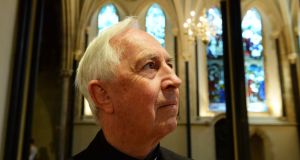 The former Dean of St Patrick’s Cathedral in Dublin Rev Victor Stacey (76) died on Wednesday following lengthy chronic illness at Brabazon House, nursing home in Sandymount, Dublin. Dean at St Patrick’s from 2012 to 2016 he had previously served as rector at Christ Church Dun Laoghaire for 17 years and Santry with Glasnevin for eight years.

From Bunclody, Co Wexford, he was son of the late George and Nora. Born in 1944, he was educated at Kilkenny College, the National University of Ireland, Trinity College Dublin and Queen’s University Belfast. He was ordained a priest in 1973 and he served curacies in Derriaghy and Knock.

In 1979, he became rector of Ballymacarrett, near Belfast in Co Down moving to Glasnevin in 1986 and Dun Laoghaire in 1995 where he remained until his election as Dean of St Patrick’s in 2012.

Paying tribute to him Archbishop of Dublin Michael Jackson said the late Dean would be remembered “for his careful custodianship of the Cathedral in both its civic and liturgical life and in welcoming visitor and pilgrim alike. Many will also remember with great affection, his gentle manner and his instinct for friendship. In recent times he has borne chronic ailment with great dignity.”

He noted also how; “Victor served the United Dioceses of Dublin & Glendalough both pastorally and as Provincial and Diocesan Registrar prior to his election as Dean of St Patrick’s Cathedral.”

Survived by his sister Joy, brothers–in–law, nephews, nieces, godchildren and friends his funeral service on Saturday will be private due to pandemic restrictions. It will be livestreamed at vimeo.com at 4pm on Saturday, January 2nd. A memorial service will take place at a later date.