Facilities call for greater clarity on who qualifies as ‘essential workers’ 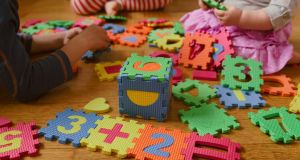 The Government said it would “provide guidance to services on how to prioritise demand for places”. Photograph: iStock

Crèches and childcare facilities are operating a “tight balancing act” by trying to cater for essential workers but still adhering to the Level 5 public health restrictions, representatives from the sector have said.

The Government last week announced that primary and secondary schools would not reopen until January 11th as a result of rising cases of Covid-19 in the community.

At the weekend, Minister for Children Roderic O’Gorman announced that this extended closure period also applied to the Government’s pre-school programme. However, crèches and childcare facilities were requested to remain open for the children of essential workers and vulnerable children.

The department at the weekend said it would “provide guidance to services on how to prioritise demand for places”, however, representatives from the sector have said no additional guidance has been issued.

Teresa Heeney, chief executive of Early Childhood Ireland, which represents 3,800 providers, said the lack of clarity over what constitutes an “essential worker” posed problems for operators.

She said that most providers who reopened on Monday are operating at between 20 and 40 per cent capacity.

“If you only have 20 per cent capacity, it is very hard with the current essential list to determine who gets that 20 per cent. Who makes the decision that you need to prioritise health care workers first or food producers or transport operators or people who work in labs?” she told The Irish Times.

“It’s very, very challenging if you’re an operator to try and be triaging through that list. It’s very difficult. Everybody is saying that they want families to know they are doing their best and having to say to one family that they have a place and say to another that they can’t is very very difficult.”

Ms Heeney also called on the Government to move childcare workers up the vaccination priority list and to provide rapid testing for operators.

“Everybody is nervous. These services operate without PPE, they use bubbles as a preventative measure. We really need to recognise that these people are offering a great commitment. I think we need to match that by meeting their needs for early vaccination and rapid testing,” she added.

“The failure to provide sufficient certainty on the definition of essential workers for accessing childcare leaves the decision in the hands of parents and places many operators in a very difficult situation,” she said.

Speaking on RTÉ’s Monday morning, the Minister for Children acknowledged the list of essential workers is a “complicated and extensive one” , but said it is the list the Government is asking childcare providers to use.

He said it would not be beneficial to create a separate list for the childcare sector, and would only create additional confusion. However, he did agree that operators should prioritise the children of parents who cannot work from home.

Mr O’Gorman added that the Government wants to avoid a “long-scale shutdown” of schools and childcare providers, but he added that the situation is under constant review.