Dermot Farrell also suggests vow of celibacy could be a choice, as in Orthodox churches 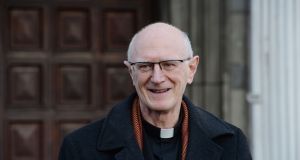 Dublin’s Catholic archbishop-elect Dermot Farrell has said he would like to see women becoming deacons in the Church.

He said the biggest barrier to female priests in the Catholic Church “is probably tradition, not the scriptures”.

“Women have almost preserved the faith in the church, certainly in this country and probably beyond,” he said in an interview before he assumes the role on February 2nd. But he expressed concern that the introduction of female priests could split the church as it had the Church of England.

Archbishop-elect Farrell also indicated a more flexible view on celibacy, saying the Orthodox approach to celibacy might be discussed as a possible future model in Catholicism. In the Orthodox churches, a priest may choose whether or not to take a vow of celibacy at ordination.

“There is a value in celibacy; there is a sacrifice involved. I do think it is an important part of the Catholic tradition,” he said.

He noted that in the eastern Orthodox churches, “you have the celibate language and you have the married language. You have to make a choice before you are ordained, usually, in those churches.”

Asked if the Orthodox model could be applied, he felt “it could be discussed”, as could choice in celibacy.

The new archbishop said he was opposed to church blessings for divorced and remarried Catholics or for same-sex couples . “Once you start blessing things like that, people are going to construe that as a marriage. We can’t have that sort of situation in the church.”

As a result of the pandemic, the archbishop-elect noted the church had suffered significant loss of income. However, he said that “where the priest was visible, on the webcam, Facebook, and he was doing the work, people responded generously”. However, “parishes where nothing went on, they’re the ones who suffered most”, he said.

Priests’ income had to be reduced, but they still had jobs and “a lot less expenses”. In contrast, he said, many of their parishioners had lost their jobs or businesses.

He said the amalgamation of parishes would continue in Dublin, as would disposal of “all this infrastructure, which belongs to a different era”. But it would be in consultation with the people. Similarly, schools divestment in the archdiocese would continue but would not be “by decree”as there had to be “dialogue with the communities”.In the meantime, Catholic schools respect children of all faiths and “are not proselytising”, he said.

He praised his predecessor, Archbishop Diarmuid Martin, for his “very courageous leadership in the area” of child safeguarding. “Maybe, cometh the hour cometh the man.” There were “awful mistakes and it wasn’t peculiar to Ireland”, he said, but he warned against the danger of complacency now.

5 Covid-19: Passengers may be required to pay for stay in quarantine