Some priests abused so many children they lost track - Diarmuid Martin

Catholic Church has to be made accountable, says Mary McAleese 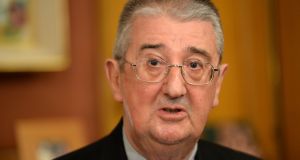 Former president Mary McAleese has said the recent decades of clerical abuse scandals have shown how “careless” the Catholic Church is of human rights, particularly those of children.

“We trust them with our children, 90 per cent of our little primary school children we trust to them,” she said. “To be that trusted they have to be that accountable.”

Mrs McAleese’s comments feature in the documentary Rome V Republic, which will be broadcast on RTÉ1 television on Thursday at 10.15pm.

“While Rome may not be involved in the lives of all Irish adults, it is still centre stage in nearly all the lives of our schoolchildren and remains a major player in Irish healthcare.”

He says “no one was prepared for the sheer scale of the abuse that was perpetrated on children by clergy”.

Clergy “had a unique position of power in Irish society. They were trusted with our children implicitly. That allowed some priests to act with impunity,” he says.

Archbishop of Dublin Diarmuid Martin tells the programme there were “hundreds” of paedophiles in the church. He says so many children were abused that some of those responsible do not even remember who their victims were.

“My people will ask, for example, a priest if a new case comes up from one of these historical cases: ‘Does this name mean anything to you?’

“Sometimes they say, ‘Yes, I abused that person’. Sometimes – this is the more worrying – the name means nothing but they can say it could’ve happened. Which means they didn’t even know how many people they abused,” he says.

Mr McDowell also accuses the State of an “abject failure to adequately monitor and inspect Catholic institutions where children were physically, sexually and emotionally abused”.

Prof Mary Daly, of the Mother and Baby Home Commission, tells the programme she does not think there was a proper appreciation of the scale of the issue. “I think you’re also into a certain innate deference that is part of the story and then, finally, I think we must acknowledge that the State did put children in there and the State was not overseeing adequately what happened in those institutions because of its innate deference. So I think the buck stops in more than one place.”

Archbishop Martin feels that “the future of the Irish church will be a very different one, and I’m optimistic that the church will come out of this in a stronger position ... much less present in structures of society but probably stronger in society with another type of influence, as is the case in many other European countries.”