Local authority advocating ‘Vienna model’, which is a move away from home ownership 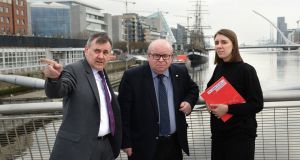 Dublin City Council has said it “fully supports” a radical change in housing policy that would see a shift in emphasis from home ownership to cost rental housing.

Figures from the Department of Housing show the number of homeless people in the State climbed above 10,000 for the first time in February. There was an increase of 277 people compared to January, including a rise of more than 160 children to 3,784.

At a conference in Dublin on Monday, Brendan Kenny, deputy chief executive of Dublin City Council, said the local authority was examining new models of housing to deal with the crisis, and was advocating a switch to the so-called “Vienna model”.

The Vienna model of housing uses a cost-rental approach, which links rents to incomes. The idea is to disrupt the link between price and market values and moderate the boom-bust cycle. In Vienna, about two thirds of the population live in social housing.

“We think it’s timely and essential to actively consider new, different models on how housing provision gets delivered over the next few years,” said Mr Kenny.

David Silke, director of research at the Housing Agency, said there are three key differences in how Vienna organises its housing stock compared to the Republic.

“The first is that they have a very steady construction programme to respond to current and future needs,” he said. “They have very effective public sector involvement in construction.

“The second is that over three quarters of homes in Vienna are rented and two thirds of those are owned by a council or non-profit organisation.

“The third difference is in how their housing is financed, which is based on cost rental. The rent charged is based on provision and maintenance rather than market rent.”

He said the agency has looked at these models of cost renting that exist in various European countries.

“We think the Viennese model is a particularly good model of how we might ensure long-term affordable rental homes for a wide cohort of Irish households with low to middle incomes,” he said.

The Vienna model of housing will be the subject of a month long exhibition, taking place from April 1st-25th at CHQ in Dublin’s Docklands, the Rediscovery Centre, Ballymun, and Richmond Barracks in Inchicore.