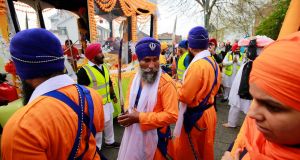 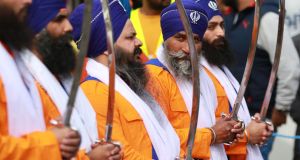 The streets of Sandymount and Ballsbridge area were awash with orange on Sunday when thousands of Sikhs turned out for the annual Vaisakhi celebration. Photograph: Nick Bradshaw

One of the happiest men among the estimated 2,000 people taking part in the Sikh parade at Dublin’s Sandymount area on Sunday was Ravinder Singh.

In 2007, he had completed the first three stages of training for the Garda Reserve when he was told he could not wear a turban, obligatory for all Sikh men. In 2013 that decision was upheld by the High Court.

Last Thursday, Garda Commissioner Drew Harris announced that Sikh men serving with the Garda would be permitted to wear turbans and Muslim women would be allowed wear a partial hijab or headscarf.

Ravinder Singh was “very happy” at the decision, which he described as “a big day for the community”. He has already been in contact with the Garda and “they said they’d come back to me”.

In Ireland 22 years and working in IT, he believes his Garda turban will be “navy blue”.

“I have the uniform at home for 12 years, with a badge to be applied on the turban. That’s what they do in the UK and other parts of the world.”

He gestured to his 16-year-old son Damanvir. who was standing nearby. “He’s got the height and the body. Another two years.”

Manmeet Singh, one of the parade organisers, said the event was about “celebrating Vaisakhi, the biggest day in a Sikh’s life because it marks the birth of Khalsa”, a foundation event in the Sikh tradition dating back to 1699. It launched a community of Sikhs committed to key principles of their faith – honour, justice, and love of humanity.

“Singh is the normal surname for all the Sikhs because we are all brothers and sisters,” he said. “We don’t cut our hair. If God gives us hair, there is a reason for that, and we are vegetarian.

“We don’t smoke or drink. We are only allowed to consume dairy products, milk, cheese – these kind of things,” he said. “The turban gives us a unique identity. We can use any colour which suits.”

The Sikh temple on Serpentine Avenue, Ballsbridge, is the only one in Ireland and people came from all over the country. There were “even a few coming from the UK as well”, he said.

Taoiseach Leo Varadkar is to visit the temple next Sunday.

Next Saturday, April 13th, marks a centenary of the Amritsar Massacre where 379 Sikhs were shot dead and a further 1,500 wounded by British forces led by Brigadier-General Rex Dyer.

He was educated at Midleton College in Co Cork and supported by Sir Michael O’Dwyer, then Lieutenant Governor of the Punjab, who was born at Barronstown, near Solohedbeg in Co Tipperary.

Standing with their parents on Tritonville Avenue as the parade passed were Ben and Sam O’Connor, aged five and four respectively, who carried messages reading “Have a fun parade” and “Happy Vaisakhi”. They also posed for photographs with parade steward Salwinver Singh.

Also at the parade was Insp Dave McInerney of the Garda National Diversity and Integration Unit. “We liaise with all the faith groups,” he said. “The Sikh community are an integral part of Irish society here and, as you know, on Friday it was announced they can join this organisation as turban-wearing Sikhs,” he said.

Minister for Housing Eoghan Murphy was invited by the local community to take part in the parade.

“I grew up around the corner so it’s great to be here,” said the Minister, who was later presented with a banner reading “Sikhs for Gender Equality” to carry in the parade.

Mr Murphy was accompanied by former SDLP leader Mark Durkan, a Fine Gael candidate for Dublin, in the European Parliament elections next month.

“I happened to host some Sikh events when I was an MP in Westminster. A former colleague of mine, who also worked for John Hume, worked for the Sikh association in the UK. The Sikh community in Ireland came to the North first,” Mr Durkan said.

If elected, he would be “representing the Dublin constituency but I would also then be in the unique position of having an authentic Northern voice. I would be able to reflect concerns, interests and indeed the insights I have as someone who was involved in negotiating and implementing the Good Friday Agreement.”