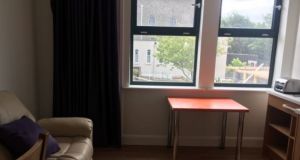 A room interior in a homeless hub. The number of people in homelessness ‘first surpassed the 10,000 mark a year ago’

The number of homeless people across Ireland is closer to 15,000 rather than the 10,000 figure reported this week, Fr Peter McVerry has said.

The latest statistics from the Department of Housing show 6,480 adults and 3,784 children/dependants – a total of 10,264 people – accessed emergency accommodation during the week beginning February 18th, 2019. This number has steadily risen since July 2014 when the first monthly report found 3,258 were homeless.

However, the number of people in homelessness first surpassed the 10,000 mark a year ago when taking into account families who were removed from the figures following the Government’s controversial recategorisation exercise.

In March 2018, 571 adults and children were reclassified because they were not staying in traditional homeless hostels, hubs or hotels but in ‘own-door’ temporary accommodation.

Combined with the official figure for homelessness that month, the total number of people would have reached 10,252. This reclassification of families has continued to date, with 207 families in the Dublin area alone recorded as living in "own-door" accommodation in January 2019.

Wayne Stanley, research and policy analyst with Focus Ireland, said the exclusion of these numbers from official data could undermine efforts to address homeless and that before reclassification was introduced, there was a “clear picture of the movement in family homelessness”.

Creating a second tier of homelessness based on the quality of the emergency accommodation risks obscuring the dynamics of family homelessness, he said.

Fr McVerry described the numbers as “irrelevant”, noting a recent report from Dublin city Council predicted the figures would continue to increase over the next three years.

“They should be increasing council housing. The Government is clearly on the side of the banks, the vulture funds and property owners.”

Fr McVerry reiterated his call for a moratorium on evictions “until we get a grip on the situation. The alternative is putting thousands of families through the trauma of homelessness.”

COPE Galway argued the 10,264 national figure only related to the number of homeless people being accommodated in State-funded emergency accommodation and did not include those sleeping rough and couch surfing.

The Galway homelessness support group noted 174 families, couples and singles were in emergency accommodation between March 14th and 15th compared to 51 households when the first COPE census was conducted in 2015.

“We have always identified March 2015 as the beginning of the Homeless Crisis in Galway,” said COPE’s Martin O’Connor. “What we didn’t anticipate at that point was the extent to which homelessness would grow in both Galway city and county and how enduring it would be, with the numbers in emergency accommodation increasing to such an extent in the intervening four-year period”.

Minister for Housing Eoghan Murphy defended his decision not to include people who have moved in with their parents or who are ‘couch surfing’ in the homeless figures, saying someone in a hotel or emergency accommodation was not in the same situation as someone who had moved back in with family.

After years of no housing construction, the Government “is playing catch up,” he told RTÉ’s Morning Ireland, adding that more houses were built in 2018 than in any previous year in the past decade. One one in four new builds were social housing, he said.