Sisters of Charity to be given new National Maternity Hospital

Order to be ‘sole owner’ of State-funded hospital, says Department of Health 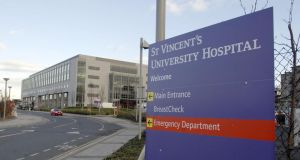 The relocation of the National Maternity Hospital from Holles Street to the St Vincent’s hospital campus in Dublin involves the largest single investment made in maternity services in the State. Photograph: Dave Meehan

A religious congregation which has failed to date to provide its share of funds to a redress scheme for institutional abuse victims, is to be given ownership of the new €300 million State-funded National Maternity Hospital.

The Sisters of Charity are the shareholders of the St Vincent’s Healthcare Group which the Department of Health said will be the “sole owner of the new hospital” which is to be built on a site at Elm Park in south Dublin.

The relocation of the hospital from Holles Street to the St Vincent’s hospital campus involves the largest single investment ever made in maternity services in the State. Proceeds from the sale of Holles Street will go towards funding the new maternity hospital.

A department spokesman said the “autonomy of the national maternity hospital board will be underpinned by reserved powers to ensure clinical and operational independence, and the Minister for Health will hold the power to protect those reserved powers”.

He said: “The financial interests of the State will be protected through a requirement for a lien to be placed on the hospital. The agreement also provides for proceeds from the sale of the NMH, Holles Street, to be invested in the new facility.”

A lien, he said, in this instance meant “a charge on the property in favour of the State in order to protect the State’s interest in the property”.

The Sisters of Charity is one of 18 religious congregations which managed residential institutions for children investigated by the Ryan commission and was party to the 2002, €128-million indemnity agreement with the State.

Following publication of the Ryan report in 2009 the Sisters of Charity offered to contribute a further €5 million towards the €1.5 billion redress costs incurred by the State involving former residents of the institutions.

According to the Comptroller and Auditor General’s report last month the Sisters of Charity have contributed just €2 million of their 2009 offer to date.

In 2013 the Sisters of Charity, along with the three other religious congregations which managed Magdalene laundries, announced that they would not be making any contribution to the State redress scheme for women who had been in the laundries.

Irish man (29) dies following avalanche at Swiss ski resort 15:41
Appeal by prisoner who claimed food being contaminated to be heard by Supreme Court 15:34
Covid-19: First dose of vaccine given to 94,000 people in State 15:10
Continuity IRA may have fired at civilian helicopter in belief it was PSNI aircraft 15:10
Paid contracts for student nurses would ‘undermine training model’, Cabinet told 14:50