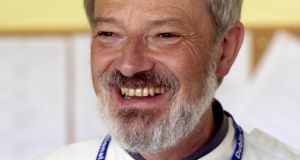 Bishop Kevin Doran: has urged people to contact their politicians and “make clear to them that you want them to defend the right to life of the unborn”. Photograph: Brenda Fitzsimons

Proposals by the Oireachtas Committee on the Eighth Amendment would pave the way for euthanasia in Ireland, Catholic Bishop of Elphin Kevin Doran has said.

Dr Doran said the proposals “are significantly more liberal than the current law in Britain, where slightly more than one in five unborn children are aborted every year”.

Abortions in England, Wales and Scotland are carried out before 24 weeks of pregnancy but can be carried out after that in certain circumstances, such as if the woman’s life is at risk or the foetus would be born with a severe disability.

Dr Doran claimed removing the Eighth Amendment would pave the way for euthanasia in Ireland, and that this was “the final frontier. If we cross it, there will be no easy way back.”

He urged people to contact their local politicians and “make clear to them that you want them to defend the right to life of the unborn. Be polite, but make sure they know you are there and they know what you believe”.

In a pastoral message published on Sunday, Bishop Doran, who is chair of the Catholic Bishops’ Task Group on Bioethics and Life, said the extension of health grounds for abortion “to include risk to the mental health of the mother provides, in practice, for abortion on demand.”

It would also “radically change the ethos of medicine, which was always about healing the sick and preventing disease. Abortion has nothing to do with healthcare.”

With the Eighth Amendment removed, “the Government would be left entirely free to introduce whatever abortion regime it chooses, now or at any time in the future. Promises made before the referendum would not in any sense be binding,” he said.

“What the committee is asking is that citizens would give the Government a blank cheque. I have never been comfortable writing blank cheques,” he said.

“If society accepts that one human being has the right to end the life of another, then it is no longer possible to claim the right to life as a fundamental human right for anybody. A number of EU member states have already legalised euthanasia.

“I am convinced that if we concede any ground on abortion, the very same arguments which are now being used to justify abortion will be used to justify ending the lives of frail elderly people and people with significant disability. This is the final frontier. If we cross it, there will be no easy way back.”

He also pointed out that “we Christians are by no means the only ones who see the hand of God at work in the formation and coming to birth of a new child. It is something which we share with Jews and Muslims and in varying degrees with people of other religious traditions.”