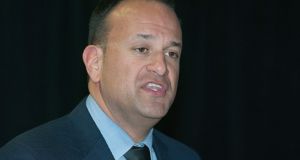 Taoiseach Leo Varadkar has not yet publicly revealed his own view on the referendum and proposals to repeal the Eighth Amendment on abortion, which guarantees the equal right to life of the mother and the unborn child. File photograph: Dave Meehan/The Irish Times

The Taoiseach has said he absolutely trusts the Irish people to make the right decision in the referendum on Eighth amendment “based on compassion, based on empathy, while not disrespecting human life”.

Leo Varadkar was speaking in the Dáil as he replied to questions from opposition leaders about recent meetings he had with church leaders and faith communities.

Mr Varadkar said the separate meetings with church leaders involved discussion on a number of issues including abortion.

Labour leader Brendan Howlin asked whether the Taoiseach had “shared with any of the faith groups your own personal views in relation to the repeal of the Eighth Amendment” or “were you just involved in a listening exercise and not sharing your own views on these matters”.

The Taoiseach has not yet publicly revealed his own view on the referendum and proposals to repeal the Eighth Amendment on abortion, which guarantees the equal right to life of the mother and the unborn child.

Mr Varadkar said the Government’s “role was to outline the process to date established by the Government to set up a Citizens’ Assembly which then made recommendations which were considered by the all-party Oireachtas committee”.

The reports of both are now being considered by Government “and we will make a decision on that shortly”.

Mr Varadkar said Catholic Church leaders were opposed to the repeal of the Eighth Amendment. “The Protestant congregations were a little bit more nuanced but were not supportive of the proposals made by the Joint Oireachtas committee.”

People Before Profit TD Richard Boyd Barrett recalled protesting at the time of the X Case on whether a 14-year-old rape victim could travel for an abortion, and “we were physically attacked with hurley sticks by people attached to the Catholic view of abortion because we were protesting about Miss X”.

He said it was important the Taoiseach send out a signal that “the Church will commit not to denigrate women” who have made the difficult decision to have abortions.

Mr Varadkar said everyone at the meeting agreed the debate over the next number of months should be respectful, should not be personalised and nobody should be pressurised to take a particular view or decision.

“I would call for respect from all sides for all sides in this debate.”

He said: “The Irish people will ultimately make this decision, and I absolutely trust the Irish people to make the right decision based on compassion, based on empathy, while not disrespecting human life.”