Do not exploit those with Down Syndrome in abortion debate - Minister

People with condition ‘listen to radio, watch TD and read media’ so respect is crucial 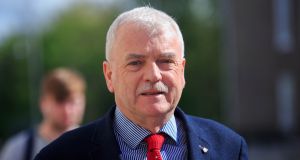 Minister of State for Disability Issues Finian McGrath: speaking as the father of a child with Down Syndrome, he said people with the condition should not be used as an argument from either side of the debate. Photograph: Gareth Chaney Collins

Participants in the abortion debate should not exploit those with Down Syndrome to make their argument, Minister of State for Disability Finian McGrath has said.

Mr McGrath said, “this is very disrespectful to children and adults with Down Syndrome and our families. It is also causing a lot of stress to parents.”

During the ongoing Dáil debate on the report of the Oireachtas Committee on the Eighth Amendment, Mr McGrath said he was speaking as the father of a daughter with Down Syndrome.

He said: “Our children and our adults, they listen to the radio, they watch the TV, they read the media articles, and the tone of this debate is crucial. Respect has got to be at the top of the agenda.”

People with Down Syndrome should not be used as an argument from either side of the debate, he insisted.

“And I ask all people here tonight not to exploit children and adults with Down Syndrome to promote their own views.”

Mr McGrath said he supported the repeal of the Eighth Amendment and a woman’s right to bodily autonomy.

Fianna Fáil TD Sean Haughey said he was born with a birth defect – cleft lip and palate. It required treatment and he was grateful to his parents for the surgery and the numerous trips to the dental hospital which he had to undertake.

“However, it would seem that in Britain, for example, some potential parents see this as an inconvenience to be avoided,” he added.

“In 2016, official figures showed in Britain that abortions of babies with a minor facial deformity nearly tripled in the previous five years.”

Mr Haughey said lives were being ended on the basis of appearance, and babies must be physically perfect.

Fiona O’Loughlin TD (Fianna Fáil) said the House had to think of the women involved with huge compassion.

It must be the most cruel and horrific of situations where a woman, initially hearing of the news and feeling the joy of birth, getting the awful and tragic news the baby was not going to survive past birth, she said.

“Who am I, or anybody here, to tell that woman how she should feel or what she should do ?” Ms O’Loughlin added.

To be the victim of degrading rape must be horrific, she said. Some women who become pregnant because of rape give birth to the baby, but there were many in that situation, having been violated in the worst possible way, could not find a way to carry on with the pregnancy.

“And it is my view they should not have to sneak abroad,” she added.

Ms O’Loughlin said she was against abortion on demand, but she would not stand in judgment of a woman who would choose a termination.

Sinn Féin TD Donnchadh Ó Laoghaire said that as a teenager he was broadly opposed, albeit vaguely, to abortion but that his position became less rigid while at university.

“But I suppose the biggest change in my views occurred while I was a member of staff here around October 2012 and that was following the tragic death of Savita Halappanavar,” he said. “I think it is fair to say that it shocked the nation and it certainly shocked and shook me.”

He said it was “a landmark moment for me”.

His party colleague Eoin Ó Broin said Sinn Féin did not currently support abortion up to 12 weeks unrestricted and would be reviewing its policy on these issues in advance of any referendum.

“Like many of my colleagues I’ll be arguing strongly internally in the party to move onto the grounds of 12 weeks unrestricted, if for no other reason you believe that a survivor of rape should not be forced to carry to full term.”