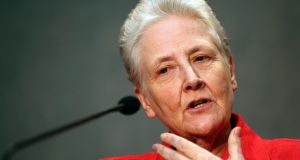 Abuse survivor Marie Collins says of the Murphy report, published 10 years ago today: “Ordinary Catholics who had felt their church was under an unjustified attack were shown that victims were telling the truth which changed the the attitude to clerical abuse in this country.” Photograph: Reuters/Alessandro Bianchi .

The publication of the Murphy Report  10 years ago today felt like “a huge turning point” as “it cut through the denials of the Catholic Church”, abuse survivor Marie Collins has said.

“However, sadly, 10 years on the Catholic Church still continues with unacceptable behaviour.”

The report, published on November 26th, 2009, investigated the handling of clerical child sex abuse allegations in Dublin’s Catholic archdiocese between 1975 and April 2004.

“Ordinary Catholics who had felt their church was under an unjustified attack were shown that victims were telling the truth which changed the the attitude to clerical abuse in this country. I saw a positive change in attitude towards myself as a survivor,” she said.

“There are improvements here in Ireland, as in other countries where similar reports have been done and there is still media attention on the issue,” she continued.

However, church authorities “appear to be incapable of learning lessons from the past”.

She said: “Vatican authorities have refused this year to co-operate with the UK inquiry into child sexual abuse just as they did with the Murphy Commission. No global safeguarding policies have been put in place and priests found guilty of abuse are still being allowed to remain in the Church.”

Andrew Madden, who in 1995 was the first person to go public in Ireland about his abuse by a priest, said “a lot of progress has been made” in State law since the report was published.

He referred to Children First legislation and widespread Garda vetting as “two very significant advances” which were added to laws on reckless endangerment and withholding information, following publication of the 2005 Ferns Report into the handling of clerical child abuse allegations in that mainly Wexford diocese.

It was the case too that such reports had given more and more abused people the confidence to come forward. “A taboo had been loosened,” he said.

But he remained deeply concerned that the seal of the confessional remained respected in Irish law, which he found “quite remarkable”, as he did the lack of outside monitoring of child protection in the Catholic Church in Ireland.

Darren McGavin also felt publication of the Murphy Report gave more abused people the confidence to come forward. His abuse by Fr Tony Walsh - since laicised - was central to Mary Raftery’s Cardinal Secrets documentary. Broadcast on RTÉ television in October 2002 it led to the legislation under which the Murphy Commission was set up.

The report “also gave me the strength to encourage others to do so. Personally it gave me validation,” he said.

The Murphy report was published just months after the report of Commission to Inquiry into Child Abuse, otherwise known as the Ryan report, which dealt with abuses in industrial schools and other institutions.

An Oireachtas committee will on today consider the question of whether to keep confidential personal testimonies given to such historical abuse inquiries.

It will report its findings on today and give a summary of the submissions that it has received. However, it will not make public the report it has prepared for Mr McHugh stating that many abuse survivors have given “private personal information”.

The draft Retention of Records Bill 2019, which was introduced into the Dáil earlier this year recommends not making testimonies public for 75 years after the bill becomes law.

Mr McHugh has stated that the records should eventually be made public so that future generations “never forget the harm that was done to children and the need to ensure that the protection of children is always to the forefront of our minds”. But the committee noted many survivors retained a “cynical view” of the proposed 75-year rule.

They said there was a danger the Bill was “sweeping this issue under the carpet again”.

In an interview with The Irish Times last May, Mr Justice Ryan highlighted the dilemma facing legislators, however, saying people gave evidence to the confidential committee on the basis that it was “utterly confidential, full stop, end of story”.

1 Aaron Brady, the man who said with pride he was a cop killer
2 A chronicle of dignity and despair
3 Aaron Brady found guilty of capital murder of Det Garda Adrian Donohoe
4 Kamala Harris targets Trump’s ‘failed government’ in first event with Biden
5 Make a Day of It: Get back into your favourite city centre, Dubs urged
Real news has value SUBSCRIBE