Dublin parish paid €3.5m compensation for loss of light due to new developments 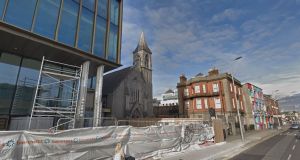 The payment is mentioned in accounts just published by the Parishes of the Diocese of Dublin, the registered Catholic charity that deals with a number of funds and income and payments made by the capital’s Catholic parishes. Photograph: Google Street View

A Catholic parish in the centre of Dublin was paid €3.5 million in compensation for the loss of light to its church caused by adjacent building developments.

The Immaculate Heart of Mary Church is on City Quay, on the south side of the Liffey, beside the Talbot Memorial Bridge.

The quay is currently undergoing extensive development driven by the profits being made from the commercial property market.

The payment is mentioned in accounts just published by the Parishes of the Diocese of Dublin, the registered Catholic charity that deals with a number of funds and income and payments made by the capital’s Catholic parishes.

Total income for the parishes during 2018 was €35.6 million, with more than half of this coming from family offerings, donations and shrine income.

Net income for the charity was €88,000, after which it gained a further €3.2 million from the sale of buildings.

Stipends to 374 serving priests were €10.4 million, while 69 retired priest were paid €1.1 million, and €3 million was expended on nursing and homecare costs.

A linked charity, the Charities of the Roman Catholic Archdiocese of Dublin, received donations of €842,000 during the year, and legacies of €98,000.

A separate set of accounts for this charity confirmed that contracts with the GAA for the proposed sale of the college and its lands, at Clonliffe Road, Drumcondra, were signed in May.

The sale was approved by the Vatican and the Charities Regulator, for a purchase price of €95,157,500, and the property will be sold in four separate tranches between 2019 and 2022, according to the accounts.

“The charity and the GAA are co-operating closely on plans to ensure the lands and buildings be developed into one of the most significant community projects for the north city in many years, providing housing, jobs and sports facilities.”

They also revealed that the archdiocese will be making a €700,000 contribution to the cost of the World Meeting of Families event, which was held in Dublin in 2018.

The three-day event at the RDS co-incided with the visit of Pope Francis. “It was an historic and faith-filled occasion for our church, our city, and our country,” the trustees said in their report.

“Included in expenses is an expected contribution by the charity in relation to remaining costs for World Meeting of Families 2018, estimated at €700,000.”

During 2018 payments of €1.02 million were made out of an unrestricted, general fund, in response to clerical sex abuse claims.

A provision of €10.6 million is contained in the accounts for potential future claims arising from clerical sex abuse of children. The equivalent figure in 2017 was €12.3 million. The balance in the general fund at year’s end was €7.6 million.

The accounts show that during 2018 the charity’s investments dropped €1.6 million in value because the the poor performance of investments markets, but the trustees said the markets “rebounded strongly” in early 2019 and the losses were recouped.

They say that the estimated Catholic population of the archdiocese, which includes most of Wicklow, considerable sections of Kildare, and parts of Carlow, Wexford and Laois, as well as all of Dublin county, is one million.

There was a significant decrease, to €6.1 million, from €22.4 million, in the deficit in the diocesan pensions schemes for a number of reasons, including the removal of guaranteed pension increases. The pension schemes are non-contributory for staff.

Holy Cross College in Drumcondra, which had not functioned as a seminary since 2000, was officially “suppressed” in May of this year and its assets transferred to the archdiocese.