Pope to grant indulgences at Dublin World Meeting of Families 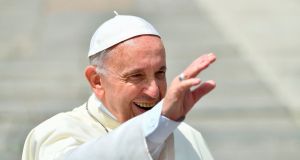 Pope Francis is due to attend the World Meeting of Families, which is to take place in Dublin between August 21st and 26th. Photograph: Alberto Pizzoli/AFP/Getty Images

Pope Francis will grant a plenary indulgence to those who take part in World Meeting of Families events in Dublin next August.

Those who receive such an indulgence would, according to Catholic doctrine, be free of the consequences of sin and, should they die in such a state, would enjoy eternal life.

A partial indulgence will be available to those unable to be in Dublin for the meeting but who follow it on radio and television.

To attain a plenary indulgence Catholics must also attend confession, receive Communion, pray for the Pope’s intentions and have a heart free of sin.

According to the Catechism of the Catholic Church “an indulgence is a remission before God of the temporal punishment due to sins whose guilt has already been forgiven”.

The Catechism teaches that all sin brings with it a temporal punishment which remains even after forgiveness. But it can be purged on this side of the grave through good deeds, prayer and penance, or, after death, by a period in purgatory.

Where the dead in purgatory are concerned they may be freed or have their period there reduced through indulgences gained on their behalf by the living.

The development features in a decree published by the Vatican which says those given a plenary indulgence will be “spiritually prepared in the best way possible”.

A partial indulgence will be available to those unable to attend but who, in addition to the usual conditions, are “united spiritually to the faithful present in Dublin, recite as a family an Our Father, the Creed and other devout prayers to invoke from the Divine Mercy the indicated intention, particularly when the words of the pontiff are transmitted by television or radio”.

A partial indulgence will also be granted to any Catholic who prays for families with a contrite heart while the meeting, which the pope is to attend, takes place between August 21st and 26th.