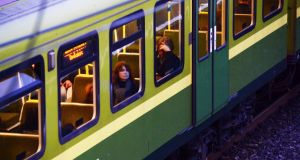 Continuing work to fix damage to signalling equipment caused by a fire is set to lead to major disruption to Dart services over the weekend. Photograph: Cyril Byrne/THE IRISH TIMES

Major disruption on rail services south of Dublin is set to continue into next week, with no trains between Dalkey and Greystones on Saturday and Sunday.

Irish Rail has said it is continuing to work to fix damage to signalling equipment caused by last week’s fire.

The fire, which occurred in a signalling relay room, has caused significant disruption to Dart services south of Dalkey, and Dublin-Rosslare train services, since Saturday.

There are no services operating between Greystones and Bray, with bus transfers in place.

The suspension of services this weekend will allow for repair works and the testing of replacement signalling equipment with a view to returning services to normal on Monday morning.

Irish Rail said that bus transfers will operate between Dublin Connolly and Greystones for all Dublin-Rosslare line services.

As no Darts are operating between Dalkey and Greystones, Dublin Bus will accept rail tickets from customers to/from areas south of Dalkey.

It advises customers to use Dublin Bus services from the city centre to and from Blackrock and Dun Laoghaire.

A reduced service is operating from Bray to Dalkey during morning peak times and from Dalkey to Bray in the evening peak at 30 minute intervals.

Irish Rail said it will provide further updates to services coming days, and would also advise on its status for Monday services when possible.

On Thursday and Friday, no rail services will operate between Greystones and Bray.

A limited bus transfer will be available between Greystones Station and Bray Station for DART services.

A bus transfer will be provided between Greystones Station and Bray/Dún Laoghaire/Dublin Connolly Stations for Rosslare/Wexford-Dublin services.

Reduced timetable, capacity and journey time between Bray and Dalkey.