Pope Francis is expected to draw crowds of more than 600,000

Pope Francis walked around chatting to journalists on his Alitalia flight before arriving in Dublin on Saturday 25th August. Video: Patsy McGarry/Reuters 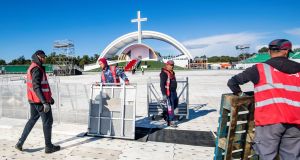 Preparations are made at the Phoenix Park in Dublin ahead of Pope Francis’s visit to Ireland. Photograph: Danny Lawson/PA Wire

More than 600,000 people are expected to turn out in Dublin and Knock this weekend to see Pope Francis during his visit to Ireland, the first by a pontiff in 39 years.

The 266th leader of the Catholic Church will land at Dublin Airport at 10.30am on Saturday, touching down on Irish soil for his first time since 1980 when, as the young priest Fr Jorge Mario Bergoglio, he studied English for three months with the Jesuit community at Milltown Park in Dublin.

The 81-year-old Argentine’s packed itinerary during his 36-hour visit begins with a stop at Áras an Uachtaráin where he will meet President Michael D Higgins.

Francis will then meet Taoiseach Leo Varadkar as well as church leaders, members of the Government, Northern Ireland political leaders and members of the judiciary in Dublin Castle. He will also travel through Dublin city centre in the “popemobile” on his way to a private visit at at the Capuchin Day Centre for homeless families near Smithfield. In the evening, the pope will make a speech at the Festival of Families concert at Croke Park. On Sunday he will fly to the Knock Shrine in Co Mayo and then return to Dublin for public mass in the Phoenix Park before his departure for Rome at 6.45pm.

Meanwhile, reports in Rome on Friday night indicated the pope has no plans to announce any new measures by the Vatican to address the clerical child sexual abuse issue on his visit to Ireland.

Authoritative Vatican sources have been quoted as saying he is of the view his Letter to the People of God on the issue last Monday was as thorough as could be. It was also pointed out that the Church already has in place whatever regulations may be necessary to deal with priests who abuse children and to hold negligent bishops and religious superiors to account.

A Vatican Insider report added, however, that while Pope Francis is not preparing any new documents on dealing with clerical child sex abuse, “some small adjustments” to canon law “are possible.”

It also said that where the accountability of bishops and religious superiors who are negligent in their handling of abuse cases is concerned, this is already provided for in canon law. “The legal weapon against covering up already existed in the 1983 code,” it said, quoting Vatican sources.

On the eve of the pontiff’s arrival, prominent abuse survivor Marie Collins, who resigned from the pope’s child protection panel last year over the Vatican’s failure to act, described a Church gripped by denial and preoccupied with self-protection when she appeared at the World Meeting of Families, the Church’s once-every-three-year convention that is bringing Francis to Ireland.

There was a fear of a “domino effect” within the Church about how many bishops could be removed if senior clerics were held accountable for the cover-up of abuse, she told the Dublin conference.

“It shouldn’t matter; every rotten apple should be got rid of and it should happen now,” she said.