Pope’s visit: Pilgrims in Dublin and Mayo may be hit by downpours 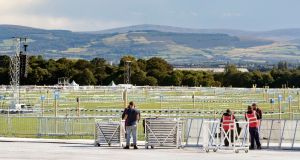 Preparations are made at Phoenix Park in Dublin ahead of Pope Francis’s visit. Photograph: Danny Lawson/PA Wire

Say a prayer for the weather this weekend - it looks like Pope Francis will narrowly miss the heavy rain but thousands of pilgrims may not be quite so lucky.

The pontiff is expected to arrive in both Knock and the Phoenix Park just after the predicted downpours have eased.

There is room for a little divine intervention though. As heavy bands of rain pass over the country late on Saturday night, they threaten a wet start at both papal destinations but should have cleared up by the time his holiness arrives.

However, Gerry Murphy of Met Eireann has reminded the hundreds of thousands of people flocking to both venues that the ground underfoot could be very wet, an important consideration for those walking between four and seven kilometres to the site of the Phoneix Park mass in particular.

About half a million people are expected to attend.

Saturday looks brighter. “He arrives in the Dublin region and there is a chance of a few isolated showers but they are few and far between,” Mr Murphy said.

Meanwhile, mild temperatures of around 17 degrees will help make pleasant conditions for the Festival of Families event at Croke Park later that evening.

On Saturday night things will take a turn with heavy rain clouds gathering across the country.

How that will play out “purely depends on the timing,” said Mr Murphy, “and there is always uncertainty about that”.

As of Friday though, it appeared most likely the rain will pass in Knock by the time proceedings begin. At the same time, Dublin will be experiencing a wet start to Sunday.

“But by the time the pope’s Mass takes place in the Phoenix Park it should be quite dry,” said Mr Murphy. By comparison, in 1979 it was a dry day with temperatures in the range of 5 to 15 degrees.

Temperatures in Dublin on the final day of the pope’s visit will fall between 16 and 20 degrees. Those winding their way out of the capital as he leaves the country, will find themselves among a mixture of clear skies and scattered showers.