Childcare subsidies for 9,000 families delayed over IT issues 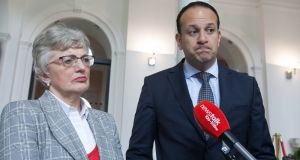 Payment of promised childcare subsidies to 9,000 families of €12 a week will be delayed because a new computer system is not yet running.

Minister for Children Katherine Zappone confirmed on Wednesday the Government’s affordable childcare scheme, a flagship announcement in last October’s budget, would not now be introduced as envisioned this September.

“There will be, and I think it’s really important to be upfront and honest, some children, though it’s not a very big number, but there will be some children that may not be able to receive the size of subsidy that we had hoped,” she said.

Families “at the higher end of the income threshold”, earning approximately €46,000, would not receive subsidies of “up to €12 per week”, Ms Zappone said. “It’s significant, but it’s still not a massive amount, and we are doing our best to get there as soon as possible for those families as well.”

Ms Zappone said she could not say exactly when the full scheme would be introduced, but “it will be in the new year some time”.

However, she said existing schemes, along with the new universal childcare subsidy for children under the age of three, would be used to ensure parents of 70,000 children would “start feeling the benefit in their pockets from September”.

Part of the challenge was the sharing of information on income between the Revenue Commissioners and the Department of Social Protection, she said.

Mr Varadkar described the scheme as “a real game changer”. He said it would require primary legislation.

He said it was fair to say not every family in Ireland would benefit immediately, but lack of access to affordable childcare was one of the main barriers to employment and further education for many parents, and “we have to start somewhere”.

The highest levels of supports will be aimed at families with the lowest incomes. Those with a net income of €22,700 a year or less will be entitled to the full subsidy, which ranges from €5.38 for a baby under one year of age to €3.96 per hour for a child in school.

“They will help ease the onerous financial burden on parents who are currently paying some of the highest childcare costs in the world.”