Walk While You Can: Fr Tony Coote travelling Ireland to raise funds to tackle disease 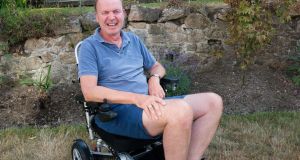 At 9.30am on Tuesday, Fr Tony Coote (54) will set off from Letterkenny, Co Donegal, on a marathon fundraising journey that, all going well, will see him arrive in Ballydehob, Co Cork, on August 6th.

The aim of the Walk While You Can initiative is to raise money for research into motor neuron disease, and for support services for carers and families of those struck down by the condition.

This time last year he could not have imagined any of this. Then administrator of Mount Merrion and Kilmacud parishes in south Co Dublin, he “had a fall last November at the back of the church coming down some steps” and thought “I had missed a step”.

My total mobility went only three, four weeks ago. I had two really bad falls

Over time his hand “began to become a bit more distorted” and he was sent for an MRI scan. “The young neurologist told me I had motor neuron disease.” The priest “literally went into shock and fell on the floor”.

The decline since that diagnosis in March has been rapid. “My total mobility went only three, four weeks ago. I had two really bad falls.”

Parishioners sponsored the wheelchair he is sitting in as he speaks. He is “in it most of the time. I say Mass in this at a small table in front of the altar, here in Mount Merrion at Kilmacud. No one minds.”

About four weeks ago, when he could not get his socks on, he realised he needed a carer. That man will take up his role when Fr Coote returns from Ballydehob.

The priest will undertake the journey there from Letterkenny on a mountain trike. “It allows me to propel by a bar at the front” and it can be pushed.

While he is no longer in full parish ministry, Fr Coote is still doing weddings, funerals, baptisms and Masses. He was officiating at a wedding in Booterstown on the Saturday that Minister for Culture Josepha Madigan conducted prayer service at the Church of St Thérèse in Mount Merrion.

The Jesuit priest who missed that Mass “had his phone turned off. So it was just one of those unfortunate ... but fortunate as well, because people weren’t sent home from the church.”

“They had an assembly where the Word was read and Holy Communion was distributed. We already have that on a Tuesday and Thursday in either parish at 10 o’clock, led by women and men.”

Fr Coote was due to move parish this summer but he asked Archbishop Diarmuid Martin if he could stay on. “He said yes; brilliant, you know. It means I’m among people rather than going to some strange place being the sick priest.”

In “a relatively short time I won’t be as active as I am now, even”.

Archbishop Martin called to see him last Saturday week “just to say hello. He said the Mass in there [Mount Merrion], you see, to kind of put that thing to bed. A storm in a tea cup, that’s all it was,” he says of the spat between Archbishop Martin and Ms Madigan over the prayer service and her accompanying plea for a greater role for women in the church.

Archbishop Martin had commented on how emotional the Mass had been, “and I said, ‘It was but it was very nice for the people to see the humanity of us all and our vulnerabilities and weaknesses’.”

I suppose what I’ve been challenged by is the suddenness of change, which is a mammoth thing

Reminded that he had quoted from the Raymond Carver poem Late Fragment in his homily at the late abuse survivor Christine Buckley’s funeral in the Church of St Thérèse four years ago, Fr Coote recited it spontaneously:

And did you get what
you wanted from this life, even so?
I did.
And what did you want?
To call myself beloved, to feel myself
beloved on the earth.

Fr Coote said he did “feel loved and I hope I have loved and, for me, that’s the very essence of what Jesus said”.

What he was going through “hasn’t really been a trial for my faith. I suppose what I’ve been challenged by is the suddenness of change, which is a mammoth thing, but I’ve still a very strong faith and I feel held, even though it’s held in some sort of mystery that I don’t know what’s going to happen.

“The future is not mine and I haven’t a clue. All I do is get up and keep going until I can’t.”

Fr Coote, whose first post was as chaplain at a school in Ballymun and who later served as chaplain at UCD, where he helped to set up a support service aimed at combating suicide, says: “I hate being dependent. It’s kind of a nightmare, but I’m adapting to it.”

Looking ahead, he sees “some meeting with the Lord face to face in time, which I believe is my destination and I truly look forward to that, I have to say.”