An Post delivers parcel by drone to island off Mayo 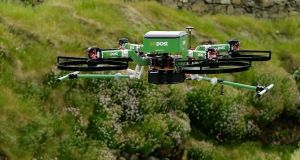 An Post delivered a parcel by drone from Roonagh Pier in Mayo to Clare Island.

An Post has made its first ever successful delivery by drone of a parcel from terra (very) firma in Mayo to Clare Island.

A spokesman said that “just after 3.30pm on Thursday we delivered a parcel by drone from Roonagh Pier in Mayo to Clare Island”.

It was An Post’s “first autonomous drone over water, a test flight and a prelude where similar flights to hard-to-reach locations are concerned,” he said.

It was also “the first of its kind in the country”. He was not sure what was in the parcel, which was “picked up by a postal operative” on Clare Island.

Such drone flights could, however, be weather dependent, as with boats and helicopters, he said, and “will not replace the regular service”.

“But it is going to be a part of the future,” he said.

It was expected these services would, in the future, be extended to other urban areas in Ireland, he said. – Patsy McGarry