O’Devaney Gardens: turning the sod on a decade of promises 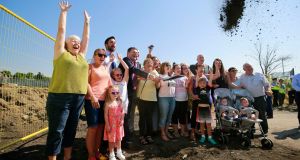 Residents join Eoghan Murphy, Minister for Housing, Paschal Donohoe, Minister for Finance, and Lord Mayor of Dublin, Councillor Nial Ring as they turn the sod on the first phase of the regeneration of O’Devaney Gardens. Photograph: Nick Bradshaw

The official sod-turning on the redevelopment of O’Devaney Gardens was attended by large numbers of politicians, journalists and city council officials, and just a handful of current and former tenants.

Most of the 278 flats in the complex close to the Phoenix Park in Dublin 7, which were once home to more than 1,000 people, have been demolished.

The old community, scattered to other social housing throughout the city more than a decade ago, showed little interest in returning for the regeneration celebrations.

The 1950s estate was one of five housing schemes which were to have been developed under a public-private partnership between developer Bernard McNamara and Dublin City Council.

In a deal finalised in 2006, the developer would replace the flats with new social housing on part of the O’Devaney Gardens site, and would be allowed build private housing for sale on the remainder of the land, creating a new estate of more than 800 homes.

Two years later, it became clear that property prices were dropping and the figures were not stacking up for the developer, with the profits from selling apartments not sufficient compensation for the cost of providing social housing, and he pulled out of all five regeneration projects.

However, at this stage, most of the flats at O’Devaney Gardens had been emptied in anticipation of redevelopment.

During the summer of 2008, the estate was the scene of several violent incidents that reached their peak in August when fighting after a wedding led to disturbances requiring several dozen gardaí to quell.

Most of the empty flats, which were repeatedly set ablaze during these incidents, were subsequently razed.

Speaking at the sod-turning ceremony for the first 56 homes on the new estate, which is expected to have almost 600 houses and apartments, Minister for Finance Paschal Donohoe recalled the 2008 collapse of the deal as a portent of the economic disaster to come.

“To see a project of that scale, that at that point had such apparent support behind it, collapse in the way it did on that fateful morning was a sign for me that we were about to get caught up in forces beyond our control,” he said.

“It was a sign for me of the dark days that unfortunately did arrive and amidst those dark days those who paid the greatest price were those who were depending on projects like this to happen.”

He said the Government was committed to ensuring that this time, the project went ahead.

In need of convincing

However, those who have paid the price of a decade of failed promises were less than convinced. Linda Hennessy, one of only three tenants still living at O’Devaney Gardens, will shortly move to a house nearby.

“I’ve been listening to this for years. I have a place to go to now, but it’s taken forever, and living here in the last few years with my kids has been terrible.”

Lorraine Douglas, who lives opposite one of the two remaining flat blocks, said the break-up of the community decimated the area.

People were promised that they could come back, but they’re too long gone away now

“They should never have emptied the place. There’s loads of space, they should have built first and then knocked down the flats. People were promised that they could come back, but they’re too long gone away now.”

Former resident Rose O’Connor, who also still lives beside the flats, said people would need to see homes built before they would believe any regeneration commitments.

“Even now, things have been allowed to drift on. It was supposed to start last year, then it was this March, then it was April. Until those houses are standing there, until there’s a community living here again, people aren’t going to swallow any promises.”