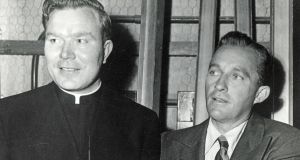 The prominent Irish “Rosary priest”, Fr Patrick Peyton, accepted funding from the US Central Intelligence Agency (CIA) to help bring about a 1964 military coup in Brazil, according to a documentary to be broadcast on Thursday night.

Guns & Rosaries, narrated by the actor Martin Sheen, dealt with Co Mayo-born Fr Peyton, who built up a huge following in the US from the mid-1940s with his slogan “the family that prays together stays together”.

He was very conscious of the political element to his Family Rosary Crusade, proclaiming that “the Rosary is the offensive weapon that will destroy communism – the great evil that seeks to destroy the faith”.

The programme (to be broadcast on RTÉ One at 10.15pm) shows that as communism was perceived to be spreading to Latin America, then-US vice-president Richard Nixon hosted a meeting at the White House where a CIA covert plan was authorised to use Fr Peyton’s Family Rosary Crusade to help fight Communism in Latin America.

In 1959 the CIA began to secretly fund Fr Peyton’s Family Rosary Crusade there, paying for advertising, promotion and events.

Brazil became a particular focus, especially after Brazilian generals approached the US seeking backing for a military coup.

The CIA’s “Operation Brother Sam” got under way, with the Family Rosary Crusade a part of it. Fr Peyton held a series of major rallies in Brazilian cities, culminating with a TV special from Rio de Janeiro in December 1963. It was a prelude to March 31st, 1964, when Brazilian generals staged a coup.

They later credited Fr Peyton’s crusades with their success and paid tribute to their influence in helping mobilise Brazilian Catholics against communism.

Fr Peyton himself said: “I consider the [Rosary] crusades in Latin America throughout the decade of the 1960s as the most significant and the most effective.” However, in 1965 the Vatican instructed Fr Peyton not to accept further funding from the CIA.

Fr Peyton was born in 1909 at Attymass, near Ballina, and emigrated to the US when he was 19. He studied for the priesthood in the seminary at the University of Notre Dame in Indiana, and was ordained in 1941.

He began work as a young priest in a parish in Albany in New York State, where he immediately started his Family Rosary Crusade. He was soon being assisted by many of the leading Hollywood stars of the day who he had befriended.

In 1954, as part of the Marian Year celebrations, he brought his Rosary Crusade to Ireland where it was estimated that as many as 445,000 people attended his rallies.

He died in 1992 at the age of 83. There is a prayer centre and museum to his memory at his home place in Attymass. As the cause for his canonisation progresses he was declared Venerable by the Vatican in December 2017.