Mexico-based Legionaries of Christ has a chapter in Leopardstown, Co Dublin 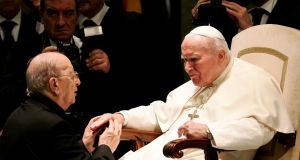 A file image from 2004 showing Pope John Paul II (right) blessing Father Marcial Maciel, founder of the Legionaries of Christ, during a special audience at the Vatican in 2004. Photograph: Reuters

Sexual abuse of minors was rife among superiors of the Legionaries of Christ Catholic religious order, with at least 60 boys abused by its founder Father Marcial Maciel, a report by the group showed.

The report is important because for decades until 2006, including during all of the pontificate of Pope John Paul, the Vatican dismissed accusations by seminarians that Maciel had abused them sexually, some when they were as young as 12.

The order said the report, which was released on Saturday and covers the period since Maciel founded it in his native Mexico in 1941 to this year, was “an additional attempt (by the Legionaries) to confront their history”.

Maciel, who died in 2008, was perhaps the Roman Catholic Church’s most notorious paedophile, even abusing children he had fathered secretly with at least two women while living a double life and being feted by the Vatican and Church conservatives.

Cardinal Angelo Sodano (92) who was secretary of state under John Paul, was for years one of the Legionaries’ biggest protectors in the Vatican.

Pope Francis accepted his resignation as dean of the college of cardinals on Saturday and simultaneously changed church law to limit the dean’s position to a five-year term, rather than for life.

The Vatican first acknowledged Maciel’s crimes in 2006, when former Pope Benedict ordered him to retire to a life of “prayer and penitence”. But Benedict resisted calls from some in the Church who said the order should be dissolved because it was toxic to the core.

The Vatican instead took over the order in 2010 and began a process of reform.

Most victims were boys between 11 and 16, it said.

The Mexico-based Legionaries of Christ has a large international base, including a chapter in Leopardstown, Co Dublin, according to its website.

In response to questions from the Irish Times about whether any of the victims were based in Ireland, a spokesman for the order said the religious organisation does not give out personal information.

In 2014, Irish-born priest Fr John O’Reilly was convicted of sexually abusing a young girl while he was a chaplain at a school operated by the Legion in Santiago, Chile.

During his sentencing, the court banned him from any job near children and ordered his genetic data be added to a registry for abusers.

Born in Ireland in 1946, Fr O’Reilly entered the novitiate of the Legionaries of Christ in 1965 and was ordained to priesthood in 1975. He began working in Chile in 1984.

Fees for boarding in the Oak Academy for boys in Wicklow are €46,900, while fees for the Woodlands Academy for girls are €44,300. The schools are mostly used by students from South America and Mexico to improve their English, and tuition fees include two trips abroad.

While the report said the 33 priests amounted to only 2.44 per cent of the 1,353 priests ordained by the order, it said nearly 43 per cent of those who committed the abuse were in positions of authority, making it difficult to report or punish the abuse.

“(Abuse) was linked to the abuse of power and conscience on the part of some who took advantage of their posts to abuse,” it said.

Of the 33 priests, six have died, eight have left the priesthood, and one had left the order.

Of the 18 who remain members, four have “ministerial restrictions” to keep them away from minors and 14 have no public priestly ministry, the report said.

Seventy-four seminarians studying for the priesthood also abused minors and 81 per cent of them were not ordained.

Father Christian Borgogno, a former member of the order, said the numbers of those abused were “clearly unlikely” to be accurate and believed that they were much higher.

“It is difficult to think that this is anything more than a whitewash of the (Legionaries’) image,” he said in a tweet. He said the reported lacked “independent sources”.

After Maciel’s death, Vatican investigations found that he had also fathered several children with at least two women, visited them regularly and sent them money.

Former members have said the order was run like a cult, with rules forbidding any criticism of the founder or questioning of his motives.

They said Maciel gave huge contributions to the Vatican during the papacy of John Paul, who admired the Legionaries’ orthodoxy and ability to produce vocations. - Additional reporting Reuters