Republic to settle nearly 3,000 refugees over next four years

Refugees would be from Syria and Eritrea and will come via Jordan, Lebanon, Ethiopia 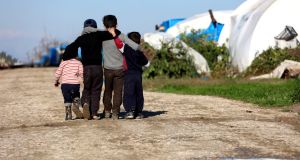 Minister for Justice Charlie Flanagan said It is ‘only right and proper’ that Ireland plays its part and offers a helping hand. File photograph: Getty

Almost 3,000 refugees will be settled in Ireland over the next four years under plans announced in Geneva on Tuesday by the Minister of State with responsibility for immigration.

David Stanton said the refugees, whose entitlement to asylum will be already established, would be from Syria and Eritrea and travel to Ireland from settlements in Jordan, Lebanon and Ethiopia.

They will arrive under the auspices of the Irish Refugee Protection Programme (IRPP) established in 2015 as part of Ireland’s response to the global refugee crisis.

Mr Stanton, who attended the Global Refugee Forum in the Swiss city, said it is “vital” the Republic works with other safe countries to resettle people fleeing war and extreme poverty.

The forum, hosted by the United Nations High Commission for Refugees, brings together international actors to discuss strategies and solutions on the issues.

“It is important that Ireland continues to play its part in acting as a safe haven for people in need of protection and humanitarian support. This new phase of the IRPP will take up to 2900 people between 2020 and 2023 through a combination of resettlement and community sponsorship,” said Mr Stanton.

“In Syria alone there are over 11 million people, including six million children, that are desperate for help. It is only right and proper that Ireland plays its part and offers a helping hand to those less fortunate than ourselves.

“This new phase of the Irish Refugee Protection Programme will build on the work we have been doing since 2015 to resettle thousands of people.”